HOW TO: Cable Clutch Conversion

The MDL kit is designed for strength as well as ease of installation. The 1/8″ thick steel support plate mounts between the firewall and master cylinder.
It not only locates the cable but strengthens the firewall by distributing the brake and clutch pedal loads.

The cable attaches to the clutch pedal using a clevis/pedal bracket. The bracket mounts to the pedal with no modifications and positions the cable at the highest point above the pedal pivot in order to maximize leverage and minimize pedal effort.

The cable is not an off-the-shelf stock piece as found in some conversion kits, it is a custom spec’d piece with a duel-lined inner cable and an integrated firewall tension adjuster.

Stock cables, such as this 5.0L unit, use inferior nylon ends and a bare cable which eventually binds and corrodes. The lined cable included in the Modern Driveline kit offers a smooth and virtually frictionless pedal effort.

Swapping a T5 overdrive manual transmission into an early Mustang or Falcon (or their Mercury cousins) has never been more popular.
We first did this swap in our ’67 Mustang several years ago, but since then countless others have also made the conversion to the modern-day five-speed for the sake of better fuel economy and faster acceleration.

For many of you, the swap was a no-brainer -your car was already a manual and you simply purchased the necessary conversion parts, the T5, and bolted it up.
Your mechanical clutch linkage worked just fine, though not nearly as smooth as the cable or hydraulic mechanisms typically found in a late model, T5 equipped, Mustang or Thunderbird.

For some of us, the conversion was a little more challenging due to the fact our cars were originally equipped with an automatic transmission. Hence we had to source the rare, and expensive, clutch pedal and associated linkage. Many of us ended up modifying parts from other model years or scrapping the swap altogether. Undoubtedly there are a good number of people still on the sidelines waiting to get into the T5 game but are unable to due to the growing scarcity of mechanical linkage components for their vehicles.

Regardless of which group you are in you can now bring your early Ford another step closer to the ease, practicality, and fun of an overdrive five-speed.
Modern Driveline has spent the last several years perfecting a clutch cable conversion kit for ’65-’68 Mustangs and Cougars and ’60-’65 Falcons and Comets.
The kit replaces all the original mechanical linkage between the pedal and the bellhousing. The only stock piece required is a clutch pedal.

There is no comparison between the pedal effort of an early mechanical clutch and that of the cable clutch mechanism found in newer cars. Cable clutches offer a huge reduction in friction and force required to depress the clutch. Furthermore, they are much easier to set up and adjust than their mechanical counterparts. Combined with a late-model diaphragm clutch the pedal effort of a cable is nearly half that of a long style pressure plate and “z” bar linkage.

The beauty of a cable is that it takes up very little space, and offers plenty of room for larger engine swaps, custom headers, or other atypical modifications that cause grief with the stock clutch linkage.

We’ve been considering a cable or hydraulic clutch conversion for quite some time. In the past couple of years, a handful of small vendors have developed kits, and we have taken them into consideration. Many of the kits required welding on the clutch pedal or firewall.
Some kits used an OE cable, while others had one custom-made.
The bottom line was the kits never seemed to be well thought out and designed.
We’ve seen many of the early designs lead to cracked or warped firewalls due to lack of load distribution.
We’ve also heard reports of poor clutch release due to improper leverage.

The Modern Driveline kit is by far the best-designed kit we’ve looked at. While it may require a little more time to install, the kit makes no compromises.
The cable passes through a steel bracket which not only distributes the load of the cable but strengthens the inherently weak firewall area behind the master cylinder.
There is no welding or modification necessary other than drilling a hole – making the entire project easily reversible if ever needed.
Follow along as we install the cable conversion kit into our ’67 Mustang

Installation
Modern Driveline claims 90 minutes to install the kit, however, that is assuming you have the T5 removed. You will need to install a cable-actuated clutch fork, as found in late model Mustangs (not included).
This requires the removal of the transmission and bellhousing.
Note if you have a T5 conversion kit that uses an adapter plate and original four-speed bellhousing, you will need to obtain a T5 or Lakewood bellhousing in order to mount the cable fork pivot.

1. If you are converting over from the stock mechanical clutch, begin by removing all the stock linkage. You won’t need any of it except the clutch pedal.

Shown is the typical linkage from a 67-68 Mustang. The reduction in moving parts is astonishing: Upper and lower pushrods, “z” bar, upper and lower return springs, underdash bracket and spring, block and frame pivots, and special bellhousing pivot mount required when using late-model 302 blocks without a pivot mount provision.

With power brakes, you will most likely need to remove the entire assembly in order to get the bracket into place. You should only have to disconnect the two main lines at the master cylinder. Always use a flare nut wrench when removing brake lines.

4. Remove the bracket and drill a hole at the marked location. The kit instructions call for a 9/16″ hole using a uni-bit. We didn’t have such a bit, so we drilled a pilot hole and stepped it up to the largest bit we had (1/2″).

5. Because the firewall angles back on a 67-70 Mustang, we had trouble drilling straight on. We ended up making another 1/2″ hole above the first, then blending the two holes together with a Dremel and grinding bit. The result is an oval hole 1/2″ wide and 1″ tall. This will allow plenty of room for unobstructed cable travel, and also for the adjuster to pass through when fully screwed in.

6. The arrow shows the hole as it appears from under the dash.   –  Note how the kit is designed to place the cable pivot point at the highest point possible under the dash/cowl.
For this reason, it is not wise to modify or reposition the support bracket.

8. Next we will connect the cable to the clevis/pedal bracket. You will need to go under the dash and feed the bracket up so the clevis protrudes through the firewall. Then thread the cable into the clevis. (Use a vise-grips to secure the bracket temporarily, or have a buddy hold it in place.)

9. Thread the cable into the clevis completely by holding the cable straight out and turning the clutch end of the cable.

10. Another way to connect the cable to the clevis is to bolt the support bracket to the firewall, then from under the dash pull the cable down as far as possible. Now you can take the pedal bracket, hold it in one hand by the clevis, and spin it on the threaded end of the cable. Be sure to secure the jam nut.

11. With the cable secured to the clevis, the pedal bracket can be mounted to the clutch pedal using the supplied bolt and ‘nylock’ nut. The bracket mounts using the existing pushrod hole in the pedal. Note the open hole in the firewall for the mechanical pushrod, we’ll cover this with a plug provided in the kit.

12. Due to the difficulty in taking pictures under the dash we’ve removed the pedal out of the car to show you how the cable bracket attaches. Note how the bracket is made to bolt to the existing pushrod bracket, no modification is necessary. However, you must have the correct clutch pedal for your model and year Mustang. If you attempt to use a 67-68 pedal, for example, in a 65-66 car the cable will not line up correctly.

14. Route the clutch cable around the oil filter and below the motor mount. The kit includes a small bracket intended to mount off an oil pan bolt, however, this pulled the cable to close to the header tube.
We fabricated a bracket to secure the cable away from the header tubes, and also to position it in line with the entry point in the bellhousing.

15. Some headers may pose a clearance problem for the cable.
We’re using Hooker Super Comps which have a large gap between the four tubes, allowing the cable to clear with about 3/8″ clearance.
Using the supplied heat-resistant sleeve for additional heat protection.

16. Before securing the cable to the bellhousing we need to change our mechanical “push” style clutch fork (top) to a late-model “pull” style. This obviously requires the removal of the transmission.

17. The pull-style fork pivots on a ball mounted on the right side of the bellhousing, while the push-type fork sits on a pivot ledge.
The throwout bearings are also different, specify on for an 87-95 Mustang and you’ll be fine. 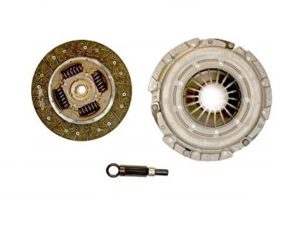 18. Though not absolutely necessary, it is recommended that you use a late-model diaphragm style clutch. The release rate of the belvile springs are designed for a cable mechanism, whereas long-style “three finger” clutches are designed around mechanical linkage. If you do use the latter with the cable mechanism you should ensure there is sufficient fork travel to release the clutch properly, and also check for about 1/8″ air gap between the throwout bearing and clutch fingers when the clutch is engaged.

19. We ended up ordering a Stage 3 SPEC clutch. The clutch uses a diaphragm style pressure plate, which is shorter in height than a long style and thus clears up our cable length problems.
The SPEC clutch disc is composed of six carbon metallic paddles, and is rated to hold 600 horsepower, without the aggressiveness of the sintered iron we were using previously.

20. With the clutch and bellhousing mounted, the cable end is passed through the bellhousing flange.
Secure the cable to fork nut and jam nut. Using the firewall adjuster we can fine-tune the cable length to get the pedal height and release point we desire.

21. The Modern Driveline kit is designed to work using the stock 8″ power booster found on 65-70 Mustang. We however had a 9″ booster from an MPBrakes power conversion kit for 67-70 Mustangs. As seen in this photo the support plate interferes with the booster body.

22. The only option for us was to pick up a stock 8″ booster (rebuilt). While the plate fits much better, we still needed to grind slightly on the corner of the support plate for the booster to sit flush.
Modern Driveline told us they have modified the plate design to eliminate this interference.

Also if you get a clamp style booster you will likely need to reposition the clamp bolt to prevent interference with the cable.

HOW TO: Install A Modern Drivelines Cable Clutch Linkage
August 7, 2019