A u-joint (universal joint) is basically a flexible pivot point that transmits power through rotational motion between two shafts not in a straight line.
The u-joint needs to be flexible to compensate for changes in the driveline angle due to the constantly changing terrain under the vehicle.

The u-joint is one of the oldest of all flexible couplings.
It is commonly known for its use on automobiles and trucks. A universal joint in its simplest form consists of two shaft yokes at right angles to each other and a four-point cross that connects the yokes. The cross rides inside the bearing cap assemblies, which are pressed into the yoke eyes. One of the problems inherent in the design of a u-joint is that the angular velocities of the components vary over a single rotation.

At the end of each output and input shaft is either a yoke and/or a flange. The yokes that hold the u-joint bearing caps are sometimes referred to as ears. The bearing caps of the u-joint are pressed into the yoke (ear) and held in place with a c-clip (half circle), an internal snap ring, or a full-circle snap ring. vehicles that see heavy off-road use should use an internal or full-circle snap ring. if c-clip-style u-joints are only available for your application you can have them modified by a qualified machinist to accept full circle clips. Over time and under harsh conditions c-clips tend to wear into irregular shapes and fall out. When the c-clip falls out eventually the u-joints bearing cap will work its way out of the yoke. if left unattended the trunnion (pin) of the u-joint will damage the shape of the yoke. This damage is very difficult to repair and usually requires the purchase of a new inner or outer axle shaft or costly driveshaft repairs.

Standard u-joints are not designed to run at extreme driveshaft angles unless they are specially constructed. as a rule of thumb, the angle of a driveshaft should not exceed 22 degrees. however, some manufacturers do make quality high angle driveshafts that operate dependably from 22 to 80 degrees.
Extreme angle driveshafts are achieved by using a double Cardan constant velocity joint. This is basically a joint with two u-joints.

This table is based upon the joint at rated load and life.  Going above the rated load or angle will decrease the u-joints life.

As a rule of thumb, for each doubling of the operating angle, RPM, or load, the lifetime of the joint is decreased by half. Rated lifetimes are on the order of 3000 hours.

In the typical off-road vehicle, a suspension lift is done to increase clearance and allow larger tires to be installed. To compensate for the larger diameter, lower gears are installed in the axles. Let’s see what this does for the driveshaft, the lift increases the angle of the shaft and the lower gears means the shaft has to spin faster for a given axle speed, both things are working in the wrong direction on this chart. No wonder, driveshaft problems are common in vehicles modified for off-road use.

Anatomy of a U-Joint: 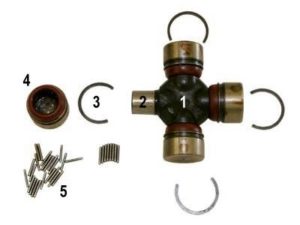 When performing general maintenance on your vehicle, it is not a bad idea to visually and manually check your u-joints for unusual wear, play, and missing clips. Engage your vehicle’s e-brake and chock the tires. Place the transmission in Neutral, crawl underneath and rotate the driveshaft back and forth, stopping quickly. Also, try to move the driveshaft forward and rearward. If the u-joints are worn you will be able to feel movement in the joint. A bad drive shaft u-joint can also be indicated by a clunk when accelerating or decelerating, especially while backing up. an unusual vibration while driving is also a good indicator that the u-joints should be checked.

1310: Typically for medium Torque/ horsepower applications in cars. Between 400lb/ft & 600 lb/ft. Depending on the use of the vehicle. 1310 is a 1/2-ton u-joint used in driveshafts for many Jeep applications and is retained via external snap rings; the ones that slightly resemble a pretzel.

1330: Typically for medium Torque/ horsepower applications in cars. Between 400lb/ft & 600 lb/ft. Depending on the use of the vehicle
This is a 3/4-ton driveshaft u-joint most often found at the pinion yoke going into Dana 60 front or rear axles.  The 1330 shares the same cap size as the 1310 but with a larger cross.

1350:  Typically for High Torque/ horsepower applications in cars. Between 600lb/ft & up.
Most 1-ton trucks of yester-year used these joints in their driveshafts but could be found in 3/4 ton and 1/2 tons occasionally.
Note the cross is the same size as 1330 to its left but the bearing caps, and therefore the trunnions that they pivot on are larger, i.e. more strength.

Here is a sizing chart: 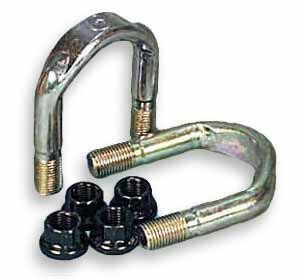 When pushed real hard with locking differentials & oversized tires, the joint’s bearing caps often will try to ‘spin’ in the yoke as the joint operates. As it rotates, it often “spits” off u-joint c-clips and then the cap is free to walk out of the yoke, departing from the axle (if it doesn’t get crushed by the ball joint stud first). The u-joint trunnion then rips apart the axle yokes, causing a catastrophic failure. Even if it doesn’t break the yoke, it will still stretch them out so they won’t properly hold the cap anymore. 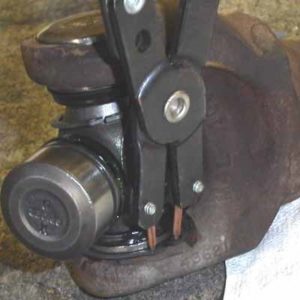 The concept of the universal joint is based on the design of gimbals, which have been in use since antiquity. One anticipation of the universal joint was its use by the Ancient Greeks on ballistae. The first person known to have suggested its use for transmitting motive power was Gerolamo Cardano, an Italian mathematician, in 1545, although it is unclear whether he produced a working model.
This Joint, was later reinvented it and it was called “Polhem knot”.
In Europe, the device is often called the Cardan joint or Cardan shaft. Robert Hooke produced a working universal joint in 1676, giving rise to an alternative name, the Hooke’s joint.
It was the American car manufacturer Henry Ford who gave it the name universal joint. 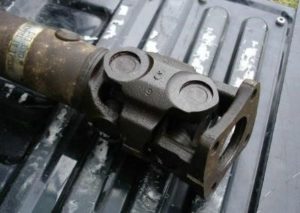 Double Cardan: ( pictured on the right )
Double Cardan is a term used when describing a one-piece driveshaft with three (or more) universal joints. What a double Cardan will do, is split a universal joint operating angle into two separate angles that are exactly one half of the original angle. Normally a Double-Cardan (a.k.a. Constant Velocity or CV) style driveshaft is used in applications where it is not possible or practical to properly align the ends of a driveshaft for a single-Cardan setup. Examples include where the operating angle would be too great over a single Cardan joint (see below) a double-Cardan allows the operating angle to be split across the two halves of the joint. It is also possible to use two CV joints on a driveshaft which is commonly used where it is not possible to align either end of the driveshaft, such as when both vertical and horizontal misalignment occurs, or when mismatched operating angles are present, such as in front-wheel drive vehicles, where both up and down motion is present from the suspension travel as well as rotation about a vertical axis due to steering action. Drawbacks of multiple CV joints are their higher cost and complexity as compared to u-joints, their extra length and weight, and their decreased maximum operating angle limitations.

External Hydraulics FAQ’s and Troubleshooting Solutions
January 18, 2021
HOW TO: Choose the Right Slip Yoke for your build
December 29, 2020