HOW TO: Choose the Right Clutch for your driving style

You are here:
CLUTCHES 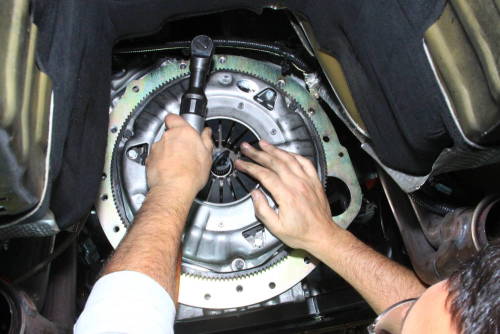 With an explanation of clutch technology, Modern Driveline shows you how to choose the right clutch for your driving style and usage.

Although clutch and flywheel selection seems like black magic science, it really is straightforward. When the right choices are made you get an unbeatable clutch and flywheel combo that will serve you well for years to come. In the long run, you will save a bunch of money with the right decision to begin with. And can you afford to make a bad decision? Think about it.

Karl Benz is generally recognized as the father of the automotive clutch, which was invented nearly a century ago. There have been many variations of the humble hard-working clutch in the years since. The clutch’s primary task is to transmit power from the engine’s crankshaft to the transmission smoothly and firmly without slippage. Some slippage is important for smooth engagement, yet without excessive slippage that will cause unnecessary wear and heat issues. You want reasonable pedal effort yet solid engagement, which is what you will get from our Superior clutches.

Clutch selection depends upon the kind of driving you intend to do. If you’re going cruising or doing the workday commute, you need a high-quality diaphragm style single disc organic clutch. Organic clutch frictions provide smooth engagement and longevity in street use. Weekend racing calls for a Kevlar/organic combination. And if you’re real serious about performance driving, a Kevlar high-performance clutch is what you’re going to need to meet the demand.

There are two basic types of clutches — diaphragm and Long style.

The Long Style three-finger clutch was original equipment in a lot of vintage applications. Because the three-finger clutch and pressure plate exert incredible amounts of pressure they also create tremendous amounts of clutch pedal effort. Back in the day a stiff clutch pedal was the norm, but not anymore. Clutch technology has since become such that you don’t have to put up with a stiff clutch pedal (or the resulting knee replacement surgery) anymore. We can’t think of any reason here at Modern Driveline why you should have to put up with a heavy-handed clutch pedal.

The Long Style clutch consists of:

Now that’s a lot of parts!

Although there are a lot of diaphragm style clutches in the marketplace Modern Driveline brings you a better clutch and here’s why. Modern Driveline brings you greater selection with a complete line of clutches and flywheels from the most trusted names in the industry — Superior and McLeod. We enjoy an extraordinary relationship with Superior Clutch because each clutch is handcrafted for Modern Driveline. Each Superior clutch goes through rigorous testing throughout the manufacturing and quality assurance process resulting in high reliability and performance.

A lot of manufacturers talk about Kevlar clutch frictions, yet in truth their clutch discs contain a very modest amount of Kevlar — some 10-20-percent — which isn’t saying much. Superior Clutch’s disc are nearly 100-percent Kevlar, which can stand extreme punishment and come back for more as hard miles are driven. If you’re a civilized driver your Superior Kevlar clutch from Modern Driveline may well be the last clutch you ever buy. They’re that good.

We can get into a lot of clutch science and physics. However, here’s what you need to know in order to make an educated purchase. There are four Modern Driveline clutch discs from Superior Clutch for your consideration — Organic, Kevlar/Organic, Kevlar/Kevlar, and Kevlar/Metal.

The Kevlar/Metal discs are designed for high horsepower, drag racing or street performance where “grab” is the name of the game. These are typically considered an “on/off” clutch. You cannot “feather” them for smooth street driving.

HOW TO: Remove your Pilot Bearing With a Piece of Bread
September 1, 2020