The solution to 2005-up Ford Mustang S197 Shift problems 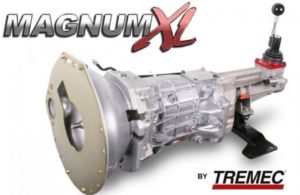 The TREMEC® T56 Magnum XL 6-speed transmission is aimed specifically at S197 Mustang enthusiasts! The new ‘direct-shift” T56 Magnum™ XL for 2005-up Ford Mustangs represents a long awaited solution to the semi-remote shifter woes experienced by many 2005-up Mustang owners, as well as, TREMEC’s most significant foray into the Mustang aftermarket since the days of emerging 5.0 Fox-body performance!

Designed almost exclusively with S197 Mustangs in mind, this new model draws from a combination of proven OE (Shelby GT500) and racing (Grand Am Cup) technologies. Featuring an application specific ‘direct-shift’ extension housing, the Magnum solves the issue of numb, inaccurate shifts offered by the factory semi-remote shifter; replacing them instead with crisp, clean, confidence-inspiring throws. The S197’s exceptional driver ergonomics are maintained; along with the added ability to custom tailor shift action thanks to TREMEC’s innovative “adjustable-bias” short throw shifter, standard on every new assembly!

Other significant features include a slip yoke rear interface, eliminating the need for complex 2-piece driveshafts, and an SFI-approved steel bellhousing for added safety in high-horsepower applications!  Installation is simple thanks to thoughtful design by TREMEC engineers and a TREMEC supplied swap-specific crossmember. In most cases users can even retain their factory clutch release system. Like all Magnum series transmissions, the new model carries with it a generous 700 lb-ft torque capacity rating, and the choice of two exclusive gear ratio combinations.

Remember, when changing from one transmission to the other that the rear-end ratio is going to make a difference. Stock ratio’s range from 2.73, 3.31, 3.55, 3.73 depending on V6 or V8 and stock vs performance package etc.

How does the T56 Magnum compare to previous T-56’s?

The kingpin of TREMEC’s high performance line-up, the all-new T-56 Magnum takes the very best from current OEM technologies and pairs it with the most popular features of the all-business TKO 5-speed.  Just what is it that makes the TREMEC T-56 Magnum better than its predecessors?

Convinced that you need one?

Give us a call today.  Our kit will include all that you need for a successful conversion to the S197 Magnum XL 6-speed.

You can also call us with your details and we’ll help you out.