You are here:
How-To'sMagazine Articles 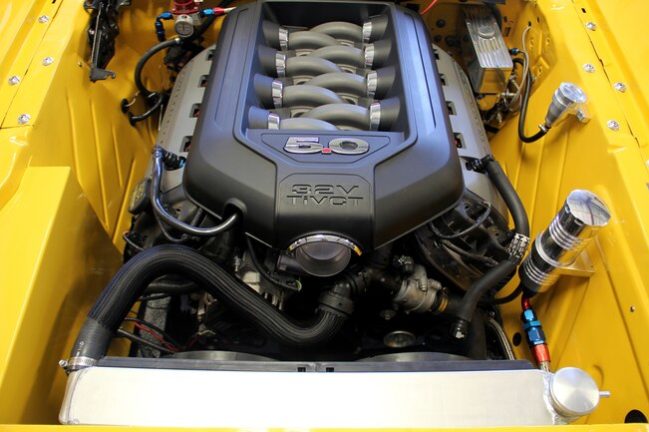 Squeeze Play: What you need to know to fit Ford’s Coyote modular V-8 into your vintage Mustang

Pushrod engines can be so 20th century. Ford hasn’t produced a production engine with a cam-in-block design that actuates the valves via pushrods and rocker arms since 2001 (and that would be the 5.0L Explorer for those keeping track at home). That’s nearly 15 years ago. Much like carburetion and four-speed manual transmissions actuated by mechanical linkage, the pushrod V-8 engine was replaced due to its inefficiencies that cost it performance, fuel mileage, and even handling/braking. When you consider today’s all-aluminum engines with multiple valves, overhead cams, and six-speed (or better) transmissions that make more power than the big-blocks we croon over from the ’60s, it is easy to see why these modern engines are ending up in more and more vintage engine swaps. It’s now easier than ever to get a modern engine fitted to a vintage Mustang and there’s no argument that the 5.0L dual overhead cam (DOHC) from the 2011 to current Mustang GT, affectionately known as the “Coyote” modular V-8, is the engine of choice today.