TECH GUIDE: 5 Things to Consider When Converting to a TREMEC 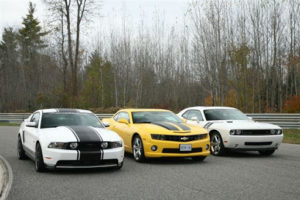 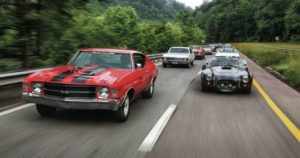 The time has come… You’re tired of cruising along with your engine screaming. Gas gauge falling. The clunky shifts of an ancient transmission. Or worse, an automatic shifting the gears for you.
The old-school cool of a manual transmission with the modern capabilities of a new TREMEC sounds great, but you’re not sure where to start.
Well, you’re in luck because we’ve compiled five key considerations for converting your car to a 5 or 6-speed transmission. 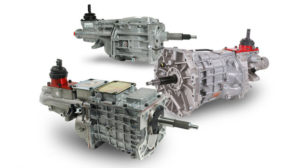 1. Which TREMEC is Right For Me?

Before we dive into the finer points, the most important thing to know is that there is more than one model of TREMEC transmission, and they are not created equal.
The three main models are – from lightest and most affordable to heaviest and most expensive –the T-5 5-speed, TKO 5-speed, and Magnum 6-speed.

T-5 5-Speed: It’s small, light, smooth-shifting, and very affordable at under $2,000.
For years, the T-5 has been a favorite of the Ford community. And it is the undisputed darling of contemporary Flathead enthusiasts, adding modern driving capabilities to a decided traditionalist platform. Once available in a wide variety of original equipment (OE) applications, today TREMEC produces the T-5 only in its well-known Fox-body Ford Mustang configuration. Rated for 300 lb-ft of input torque, the T-5 is an excellent platform for moderate horsepower and/or lightweight cruisers. However, its limited torque capacity and lack of flexibility often force it to yield to the TKO 5-speed.

TKO 5-Speed: This is our most popular aftermarket transmission. It’s tough, versatile and available in either Ford- or GM-style 4-speed bellhousing bolt patterns, which no doubt contributes to its popularity. For nearly 20 years, the TKO has been harnessing the power of Detroit’s classics. It offers up to 600 lb-ft of torque capacity, 6,200 rpm shifts, and a ton of swap-friendly features, including multiple shifter locations and optional overdrive ratios. Available for under $3,000 and benefitting from unrivaled aftermarket support, the TKO is the value-packed choice of manual hot-rodders everywhere. If you insist on having the very best though, then this is no match for the Magnum 6-speed transmission.

Magnum 6-Speed Series: We say “Series” because there are three variations: the original Magnum, Magnum F, and Magnum XL. All are based on TREMEC’s pervasive TR-6060. The differences between them are primarily their shifter locations and overall length. Click here to read an article detailing the differences between Magnum, Magnum F, and Magnum XL 6-speed transmissions.

TREMEC rates the 6-speed Series transmissions for 700 lb-ft of torque capacity and 7,800 rpm shifts. Because the Magnums use a common T-56–style bellhousing bolt pattern, they are generally considered ideal for mating to late-model engines like the GM LS, Ford modular (including Coyote), and Chrysler Gen III Hemi. They are also good for use behind popular sport-compact engines such as the Toyota 2JZ and Mazda rotary due to their ability to withstand high power and rpm. Prices for these units usually extends into the upper-$3,000 range, depending on the model.

2. Which Ratios are Right for Me? 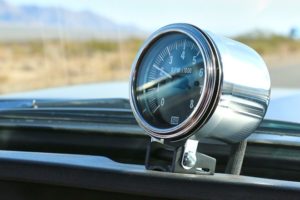 Most people who are considering a TREMEC transmission fall into one of two camps.
There are the “I don’t need a 6-speed” crowd and the “I must have a 6-speed” constituency.
Before you get too hung up on ratios, first be mindful of the points we just mentioned (capacity, price, etc.), and weigh them accordingly. Only you can prioritize these factors. Next, take a good, hard look at the ratios that each model offers. What people often miss is that the TKO 5-speed and Magnum 6-speed can be had with very similar ratios! The main difference is that in the single-overdrive TKO 5-speed, you typically choose between either 0.82:1 or 0.64:1 overdrive, for an 18 percent or 36 percent overdrive, respectively. With the Magnum 6-speed, you can essentially have both (0.80:1 Fifth and 0.63:1 Sixth) in one box!

This is where the term double overdrive comes from. Having a 6-speed doesn’t automatically mean taller overdrive ratios (although a .74/.50 combination is available). In most cases, it simply means enhanced ratio coverage.

Other things to look at are the First gear ratios, which will play a big role in how your vehicle launches. A shorter – numerically higher – gear ratio means more torque multiplication and, thus, a more aggressive launch. However, more is not always better. Taller – numerically lower – ratios often prove more user-friendly in the real world and have the benefit of increasing torque capacity by way of reduced multiplication. Picking the right ratios means carefully considering how your car is going to be used. It also forces you to consider other parts of the system, such as your rear axle ratio and how tall of a rear tire you plan to run. To know exactly how a given transmission, rear end ratio, and tire size are going to affect your vehicle’s behavior, check out the TREMEC gear ratio calculator, available in the TREMEC Tool Box mobile app, or on the TREMEC website. And remember, it’s cheaper to change rear tires or gears than it is the transmission.

3. Which TREMEC Transmission Model Will Fit My Vehicle Best? 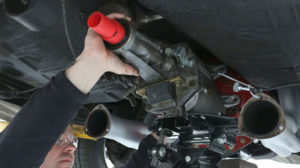 In almost all cases, the short answer here is going to be the T-5 5-speed, simply because it is the smallest. However, as we mentioned, it also has the fewest amount of built-in flexibility features and the lowest torque capacity of the bunch. For most, this means that the choice will be between the TKO 5-speed and Magnum 6-speed. And here again, because the TKO is smaller, it will generally fit better in more spaces. In all cases, achieving the proper fit where interference might exist is just some sheet metal and a reciprocating saw away from being fixed. However, for some owners, perhaps you included, cutting is simply not an option.

The size and shape of transmission tunnels can vary wildly from application to application. You might intuitively think that smaller cars have smaller tunnels and big cars would have big tunnels, but, it is often quite different. Big cars intended to regularly transport multiple occupants typically have flatter floors designed specifically with passenger capacity and comfort in mind. Smaller, sportier models are less focused on the capacity of passengers and more on performance hardware. An example of this would be the iconic Chevrolet Camaro and Chevelle of the late 1960s and early 1970s. Whereas the Camaro will virtually always swallow a TKO whole with no issues whatsoever, the Chevelle, along with all 1964-77 GM A-bodies, will almost always require some modification. How much depends on the condition of the vehicle and which installation kit from ModernDriveLine is being used.

For more precise information about how a given TREMEC model will fit your specific vehicle, call and talk to one of the helpful people at Modern DriveLine We are conversion specialists. 208-453-9800 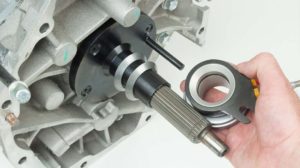 4. Will I Need to Convert My Clutch Release System?

Modern DriveLine has the answer to the question of whether you can convert your clutch release system (typically from mechanical to hydraulic) is almost always a resounding “Yes!”
Whether you need to or should convert is a different story.
The best place to start is with an examination of your wants, budget, and existing hardware.

Going back to the ability of the TKO to mate with many older 3 & 4-speed bellhousings, one of the biggest reasons that the TKO is so popular is because it often allows users to retain critical parts like the bell crank and clutch-release system.

Not only can this save you a bundle, but this plug-and-play swap also reduces complexity. Actuation will feel familiar and, for some people, that is a very good thing.

That being said, a hydraulic clutch system is nice, and this typically results in a considerably reduced clutch pedal effort. In fact, for many people, hydraulic kits from Modern DriveLine are what allow them to continue driving an early stick shift vehicle despite knee injuries or the natural effects of aging.
Hydraulics usually come with packaging benefits too, eliminating interference issues with headers and the like. Finally, if you do not have a car originally equipped with a manual transmission or any of the parts needed to re-create a factory mechanical setup, an aftermarket hydraulic kit can save countless hours of hunting for hard-to-find parts.

Keep in mind that if you already have a mechanical arrangement and want hydraulics but perhaps do not have the funds, a hydraulic release system is something that can always be added later.

Virtually all TREMEC conversions require a few more items, including a swap-specific or modified factory driveshaft (i.e. shortening the shaft and adding the appropriate slip yoke) 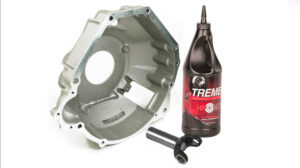 Additional items to consider are:

a custom crossmember
new clutch and flywheel
hydraulic release kits
Like all the parts mentioned above, Modern DriveLine has them.

offset shifters to bring your shifter right up in factory position even with a console. 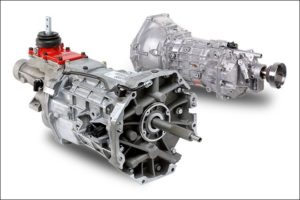 A much-asked question:
Do I Need to Buy a New TREMEC Transmission, or Can I Get One From a Salvage Yard?

If you found any of the considerations, we just covered to be daunting, then the short answer is to stay away from salvage yard transmissions. TREMEC aftermarket transmissions – the TKO and Magnum in particular – are engineered specifically to be conversion-friendly. Many of the conversion parts offered by Modern DriveLine are made specifically for these models of transmission. Ford, GM, Mopar, and many specialty applications.

Salvage or otherwise used transmissions from cars that came from the factory with a TREMEC transmission have many provisions and features intended specifically for that specific vehicle. In addition, unless you know the source of the transmission and how well it functioned before its removal from the vehicle, buying any used manual transmission can be a roll of the dice. After all, if you go through all the trouble to swap in a used transmission only to discover that it needs to be removed and rebuilt, was it really that cheap?

Click here to read more about the differences between the TREMEC TR-6060 vs Magnum.