You are here:
Magazine ArticlesSpecial Interest 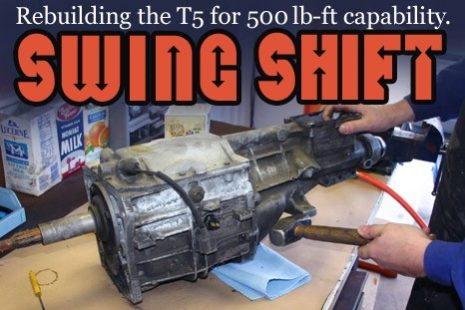 For small block Ford enthusiasts the T5 manual transmission may be the greatest thing since sliced bread. With five fully synchronized forward gears, overdrive, an internal shift-rail mechanism and the ability to handle over 300 lb-ft of torque, the T5 is easily the number one choice of anyone considering an auto to manual transmission conversion. The compact dimensions and feather-like weight (75 lbs.) also makes it well suited for competition oriented Mustangs to restomoded Falcons and Comets looking for a modernized drivetrain.

Subsequent to the T5 the only worthwhile manual gear box to put behind a modified, yet street driven, small block Ford was the tremendously popular Ford four speed “Top-Loader”. Other manual transmissions were certainly available to put behind a 302 engine, such as the Borg Warner T10, the English sourced Dagenham four-speed (factory option in most 60’s Mustangs and Falcons). However none of these transmissions offered overdrive, perhaps the single biggest reason that enthusiasts seek out a T5 transmission swaps. The four-speed SROD’s boxes had overdrive, but not suitable behind any significant power levels.