You are here:
Tech InfoTransmission Details 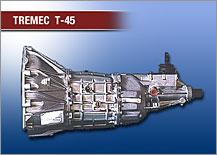 The T-45 five-speed overdrive transmission was developed primarily for high-performance cars with relatively high-engine torque requirements but is adaptable to other light-duty applications such as sport utility light trucks.

The Borg Warner T-45 was introduced in 1996 when the Ford 4.6L Modular motor was released.  These transmissions were only used behind 4.6L single and dual over head Mustangs from 1996 to 2001.  TREMEC, in 2001, replaced the T-45 with the TR-3650 which is very similar in design.  Added strength comes from a 31 spline main shaft and front loading case.  The T-45’s design is very much like the T-56 six speed transmissions.  In fact the T-45 and T-56 share many of the same parts.  It has single rail gear selector and carbon lined steel synchro rings making it a smooth shifting transmission at high rpm’s.  The gears are larger and stronger then a T-5.

T-45’s from 1996-98 GT are different than the Cobra Mustangs. The transmission mount point is moved further back for the Cobras and as well as a 8 tooth drive speedometer gear. Cobra T-45’s are equipped with a 7 tooth speedo gear. In 1999 all T-45’s were changed to the Cobra specs. Why this was not done earlier is not understood.

T-45 shifters are the same as the T-5 shifter, therefore, any aftermarket shifter will work on both transmissions.  Borg Warner WC T-5/T-45/T-56 all use ATF oil or Synthetic ATF.  No other oil should be used.  Redline MTL should not be used.  Redline ATF is fine.  My recommendation is to use Amsoil ATF as I have used it for years at the track with great results.

TKX Five-Speed For The Generations Article by: Jim Smart
November 24, 2020