Super Snake… the Cobra to end all Cobras! 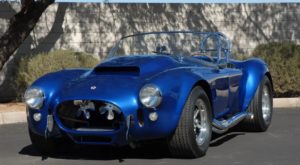 One of the most iconic American cars of all time, the Shelby Cobra, came to be in 1962 when Carroll Shelby combined Ford-made V-8 engines with British-designed AC Ace bodies. Although the Ace was fairly old and close to discontinuation in 1962, its lightweight structure helped Shelby create one of the greatest American sports cars. Built until 1968 in various road-legal and race-spec configurations, the Cobra reached its performance peak when the Super Snake was launched in 1966. Called the “Cobra to end all Cobras,” the Super Snake is the rarest of the bunch, and it still holds the title for the most expensive American car sold at auction.

“When I built this dual supercharged 427 Cobra in 1966, I wanted it to be the fastest, meanest car on the road,” Shelby told Barrett-Jackson in 2007 when the roadster was auctioned for its record price. “Forty years later, it will still kick the tail of just about anything in the world. It’s the fastest street-legal Cobra I’ve ever owned.”

HOVER OVER THE CHART TO ENLARGE

The Super Snake also gained typical road-going features, including a windshield and a roll-bar behind the driver’s seat

The Super Snake started life as a Cobra Competition model, which wasn’t road-legal due to the fact that it didn’t have mufflers, a windshield, or bumpers. Reclassified as a Semi-Competition (S/C) model thanks to various changes to the drivetrain, the Super Snake also gained typical road-going features, including a windshield and a roll-bar behind the driver’s seat. However, it was still notably different from other road-legal Cobras.

The front end was the main area that set it apart. The opening in the nose was enlarged and the production grille removed, leaving the fans and some of the drivetrain visible. Although it didn’t get proper bumpers, the Super Snake had the bars that would support them. The engine hood also gains a massive bulge in order to make way for the superchargers, while the front fenders became wider to make way for the fat tires.

While road-legal Cobras had a traditional exhaust that exiting around back, the Super Snake retained the configuration of race-spec Cobras

While typical road-legal Cobras had a traditional exhaust that exiting around the back, the Super Snake retained the configuration of race-spec Cobras, with two massive pipes exiting the car behind the front wheels and extending all the way to the rear wheels. The rear fenders were also widened to house tires that were beefier than the ones upfront, which gave the Super Snake a dragster-like appearance. The rear end remains unchanged for the most part.

The Super Snake is also famous for its blue metallic paint that later inspired colors for modern Mustangs made by either Ford or Shelby. All told, this Cobra is highly recognizable. You might never see it unless you attend special events, but if you do, you’ll know it’s THE Super Snake.

The interior of the Super Snake wasn’t very different from the usual Cobra. Sure, it had more gauges on the dashboard as the supercharged engine needed extra monitoring, but the layout was rather familiar.

Impressively enough, the Super Snake had no fewer than 11 gauges. Three, including the speedo, were placed in front of the driver, behind the steering wheel, while the other eight were mounted on the center section of the dash. Eight more switches completed the control layout, which made the dash look a bit crowded. But the Super Snake was designed as a race car for the road, so nothing looked out of place.

Much like the regular Cobra, the tiny door panels were flat. The lack of features here is explained by Carroll’s wish for the car to be as light as possible.
The center tunnel is also fairly simple, with just a shifter placed on top and a hand-brake lever on the passenger side.

The seats were also simple, which is a bit surprising given the immense power this roadster has. But again, Carroll wanted to keep things simple. Proper seat belts are also missing, which was a really bad idea back then when the owner of the second Super Snake was killed in a crash.

The Super Snake was rated at 800 horsepower, an insane figure considering the car tipped the scales at only 2,550 pounds

The Super Snake used the same 7.0-liter V-8 engine as the Cobra 427, but Carroll changes some of the internals and added a pair of superchargers.
This increased output to a whopping 800 horsepower, an insane figure given that the car tipped the scales at only 2,550 pounds. This power-to-weight ratio is greater than that of a Bugatti Veyron, which has 1,184 horsepower.

The transmission was a three-speed automatic that sent all that oomph to the rear wheels quick enough to push the Super Snake from 0 to 60 mph in a little over three seconds.
Top speed was never unveiled, but it’s believed that the Super Snake could hit close to 200 mph.

The Super Snake was auctioned off for $5.5 million, making it the most expensive American car ever sold at a public auction

Unlike most cars, the Super Snake never had a sticker as it was never intended to be sold in dealerships. Carroll Shelby ordered only two cars to be built. One for him, which he kept and drove until 2007, and one for comedian Bill Cosby. The second car was short-lived though. Cosby returned the Super Snake to Shelby after just one drive, claiming that the roadster was far too powerful and aggressive. The comedian used this experience as material on his “200 MPH” album from 1968, which included a 12-minute blurb about the Super Snake.

The car was then shipped out to one of Shelby’s dealers in San Francisco, S&C Ford on Van Ness Avenue. S&C Ford then sold it to customer Tony Maxey. The car was wrecked, but there are two different stories. While some claim that it was destroyed in a road accident that killed the driver, a different version claims that Maxey had the throttle stuck while leaving a traffic stop, lost control, and drove it off a cliff, landing in the Pacific Ocean.

The only remaining Super Snake was auctioned off in January 2007 at the Barrett-Jackson Collector Car Auction. The roadster changed hands for $5.5 million, becoming the most expensive American car ever sold at a public auction.

With only 998 examples built from inception to 1968, the Shelby Cobra is one of the rarest American cars. It’s also one of the world’s most often imitated and duplicated American sports cars, with more copies than originals on the road nowadays.
The Super Snake is arguably the rarest of them all, with just one example still on the road. More impressively, the Super Snake is not only unique but it was also owned and driven by Carroll Shelby himself. Needless to say, buying a Super Snake is next to impossible now, as it means you have to buy The Super Snake. It’s hard to believe that the current owner will let it go anytime soon, and even if it does, now with Carroll Shelby no longer among us, its value has likely peaked beyond the $10-million mark.

A little bit on the CHEVY IMPALA
September 3, 2021
Go to Top