A little bit on the CHEVY IMPALA 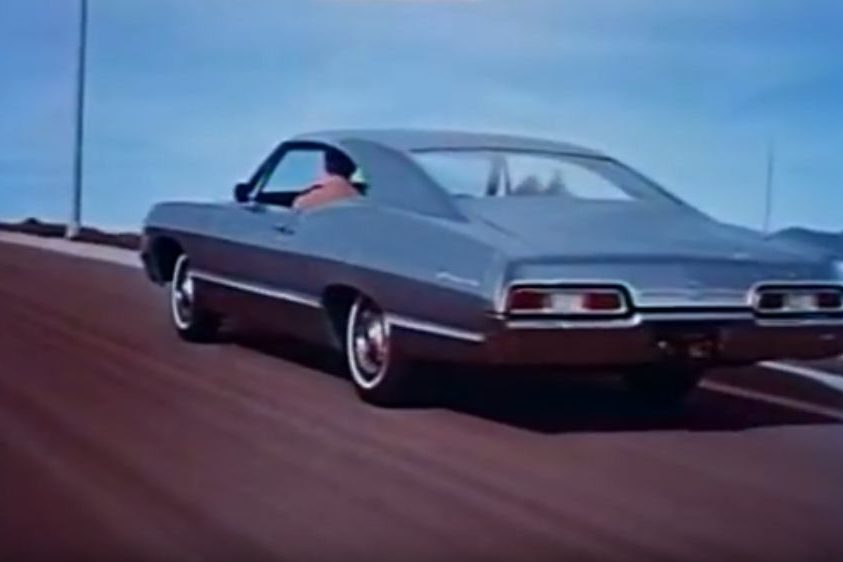 The storied Impala nameplate first appeared on a concept car shown at the 1956 Motorama, General Motors’ self-produced car show.
Effectively a five-seat hard-top Corvette, it seemed fitting to name it after the impala, a gazelle that can leap up to 30 feet at a stretch.

The production Impala premiered in 1958 as the Bel Air Impala, the top-line model of the full-size Chevrolet lineup. (This was at a time when model names were treated more like trim levels.) Engine choices ranged from Chevy’s thirties-era 145-hp six to an all-new 348 cid (5.7L) V-8 producing up to 315 hp. The new Impala was opulent (and expensive) enough to make critics question whether Chevrolet could still be considered a low-price car.

The Impala became a stand-alone model for 1959. In 1961 Chevy introduced the Impala SS, with power choices including the new (and now very rare) 360-hp 409 cid (6.7-liter) V-8. After ’62, the SS became primarily an appearance package, but it still could be ordered with Chevrolet’s largest engines and beefed-up chassis components. The SS package was dropped for 1970, though the Impala could still be ordered with big-block power. 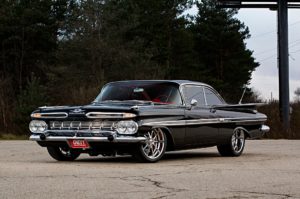 The 1962-’64 Impala was the last to use an X-type frame, before the ’65 with its perimeter frame and streamlined styling took over.
These boxy Impalas, particularly 1964 models, have become an icon of hip-hop and low-rider culture.

The Impala reigned as the top-of-the-line full-size Chevrolet from 1958 until 1966 when the Caprice was introduced. Chevrolet dropped the Biscayne for 1973 and the Bel Air in 1976, leaving Impala as Chevy’s entry-level full-size car.

GM dramatically downsized all of its full-size cars in 1977, and the new Chevy lineup consisted of Impala and Caprice Classic. Both were offered as a sedan, wagon, or coupe with a beautiful folded-glass rear window on 1977-79 models. As the base model, the Impala was popular with taxi and police fleets. Coupes and wagons were dropped after 1981, though they continued under the Caprice lineup. The Impala name was dropped for 1986, while the Caprice lived on. 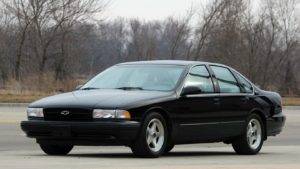 When the Impala name returned, it once again did so as a concept car. Unveiled at the 1992 Detroit Auto Show, the Impala SS was a murdered-out Caprice with a lowered suspension and an 8.2-liter V-8. The Impala SS went into production for the 1994 model year, effectively a civilian version of the 9C1 police package with a 260-horsepower 5.7-liter V-8. It was heralded by the famous “Lord Vader, your car is ready” ad campaign and remained in production through the 1996 model year.

The Impala returned in 2000, replacing the Lumina as Chevrolet’s large front-wheel-drive sedan. A police version featured a beefed-up suspension and a 3.8-liter V-6. In 2004, Chevrolet offered an Impala SS with a 240-hp supercharged 3.8-liter V-6. For 2006, an all-new (and rather anonymously-styled) Impala was unveiled, and the SS model got a big 5.3-liter V-8 stuffed between its front wheels. Aside from the SS, most Impalas went to fleets rather than private buyers. Chevrolet introduced a 50th-Anniversary edition in 2008. An all-new Impala appeared for the 2014 model year, but the old version remained in production for fleet sales as the Impala Classic and was available through the 2016 model year.

The all-new 2014 Impala was bigger, more opulent, and more aggressively styled. It was well received and sold strongly in its first few years, though sales dwindled as SUVs ascended to dominance in the family-car segment. Chevrolet ceased production of the Impala in 2020.