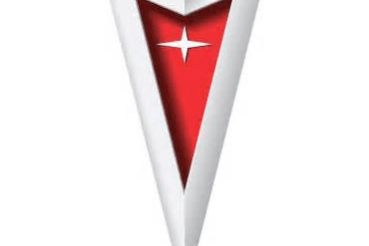 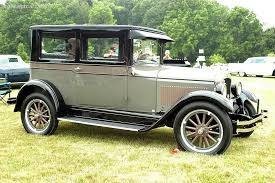 GM created Pontiac in 1926.
The company’s first car was an inexpensive six-cylinder “companion” to GM’s more expensive Oakland brand. Ironically, Pontiac shined while Oakland faded. The Depression undoubtedly played the role of killer, as it did to so many of the mid to expensive brands. Pontiac barely survived, and the fact that it did owes to the first use of cross-divisional sharing of manufacturing and bodies at GM. It was a prescient move that would eventually come to absorb all the GM divisions.

GM President Alfred P. Sloan, the “father of the modern corporation” spent his career shaping the delicate balance between once-independently run divisions into a coherent structure that still allowed creativity, initiative, and the divisions’ unique qualities to blossom. Pontiac was too close to Chevrolet and too small to survive the Depression, so for 1932, Pontiac’s manufacturing was combined with Chevrolet, saving enormous cost for tooling, engineering, and production. It was the prototype for GM, and Pontiac spent the rest of its life trying to differentiate itself sufficiently from Chevrolet, despite their fundamental similarities.

The 1933 Pontiac enjoyed a handsome restyle, and a new straight-eight engine that would end up lasting until 1954. The “big car” look and the new engine helped Pontiac’s “Economy Straight Eight” revive the brand’s fortunes, and sales took a steady upwards trajectory. The 1935 Pontiacs were the beneficiary of a bold ribbed band, called Silver Streak, echoing the fluted streamlined trains of the time. 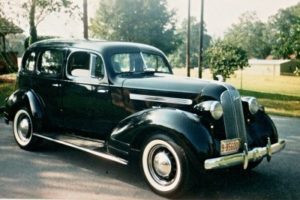 In Sloan’s “a car for every pocketbook” dictum, Pontiac’s prices slotted in exactly between the most expensive Chevy and the cheapest Oldsmobile. The positioning defined the brand; a Pontiac was a real step up the ownership ladder for the Chevy driver of the thirties. Pontiacs of the time did not emphasize performance; in fact, a good running Ford could probably outrun one. The goal was to entice low-end buyers to step up to a more stylish and higher prestige brand.

As the Depression eased, Pontiac stayed in the sweet spot, introducing its resolutely conservative, middle-class customers to industry-firsts like the column-mounted gear shift and a choice of six- and eight-cylinder engines. And it worked handsomely, propelling the Silver Streaks to fifth place in the sales charts in 1937 with the stylish new cars of that year.

In 1941, the final pre-war GM cars were introduced. Pontiac had two distinct levels: the smaller cars shared Chevrolet bodies, and the larger ones used the corporate B-body along with the junior Oldsmobile and Buicks. The three-body hierarchy was now solidly established and would stay largely intact until 1959, when all GM cars (except Corvette) shared a single basic body design, with some variation in wheelbase length. These larger Pontiacs, like the Streamliner 8  were the equivalent of the Bonneville in the sixties and seventies, competing with the mid-level full-sized cousins at Olds and Buick. 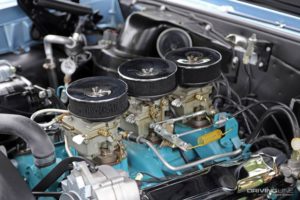 In 1964, a group of passionate and slightly rebellious men at General Motors’ Pontiac Motor Division led by John Z. Delorean built a car that not only launched an entirely new market but also started an automotive revolution. The car was the Pontiac GTO, and it quickly became a thing of legend. The GTO is the car that’s widely credited as the first true American muscle car, and it was built with a formula that hot rodders and racers had already been using for decades — a bigger engine in a lighter car.
Admit it… you can hear “Little GTO” by Ronnie & the Daytonas in your head right now.

It’s important to note that in this pre-German/Japanese invasion era of fossilized British roadsters, the GTO (and its many imitators) offered the best overall bang-for-the-buck equation.
Pontiac was BMW before BMW was cool (or available). And Car and Driver largely made its reputation glorifying the virtues of the emerging American muscle car. It was a renaissance in the making.

Stuffed with the larger 389 cubic inch V8 from Pontiac’s full-size line, the guys knew they had something special on their hands.

Driven partly by its performance and partly because of a very effective marketing campaign, the GTO quickly become a sales success, and thus launched the journey of one of America’s most iconic automobiles. Soon, other brands — both from within General Motors and all across Detroit — wanted to get in on the action, and the muscle car era was born. 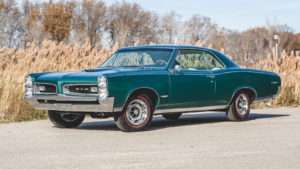 1966 was an important year for the GTO. The styling was all-new, and not only did the car become its own model, separate from the Tempest line, ’66 also saw the highest sales numbers for any year the GTO was produced.

Only minor differences separate the exterior of the ’66 and ’67 GTO, but there were significant changes underneath. The 389 V8 increased in displacement to 400 cubic inches and, while the tri-power option was dropped, three different single carb versions were available, with the hottest producing 360 horsepower. The old two-speed automatic transmission was also replaced with a three-speed TH400.

Pontiac managed another styling coup with their 1968 GTO. With its Endura resilient front end, it was a remarkable milestone in both technology and styling. The ’68 GTO was awarded Motor Trend Car of the Year.

For the first time, chrome was absent, and a unified and integrated front end was achieved for the first time. It’s not a stretch to say that this is the father of all modern car’s front ends, and successfully predicted the disappearance of the chrome bumper forever. It wasn’t a straight line, due to the 5 mph bumpers of the seventies, but this Goat, with its lack of a continuous beltline, is a remarkable prophet of styling to come. 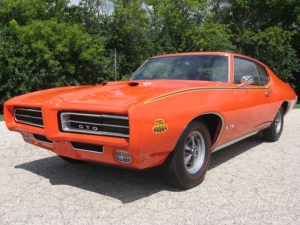 The big news in 1969 was the addition of the “The Judge,” a special edition of the GTO that featured unique striping, a rear spoiler, and other goodies to set it apart from the standard-issue car. In terms of engines, the top-of-the-line Ram Air IV 400 was rated at 370 horsepower — although, that figure is said to be significantly underrated compared to its actual output.

For 1970, the GTO saw significant styling changes with quad headlamps and more aggressive body lines. The Judge option continued, and the big change was the availability of a 455-cubic-inch engine that produced a staggering 500 foot-pounds of torque.

The Pontiac Firebird remained in production for 35 years and four generations. It would go on to become an extremely successful American performance car as well as a pop-cultural reference point.
Firebirds were featured in such movies as 1977’s “Smokey and the Bandit,” in which actor Burt Reynolds drove a black Pontiac Trans Am, and the 1980s hit TV show “Knight Rider,” which starred a Pontiac Trans Am and let’s not forget the gold firebird driven by in the Rockford Files. Not to mention brief appearances in many other TV shows & movies
“More than any other G.M. brand, Pontiac stood for performance, speed, and sex appeal.” 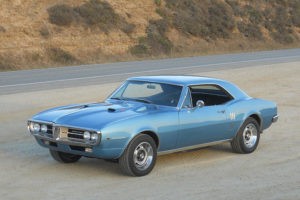 The first-generation Firebird had characteristic Coke bottle styling shared with its cousin, the Chevrolet Camaro. Announcing a Pontiac styling trend, the Firebird’s bumpers were integrated into the design of the front end, giving it a more streamlined look than the Camaro. The Firebird’s rear “slit” taillights were inspired by the 1966–1967 Pontiac GTO. Both a two-door hardtop and a convertible were offered through the 1969 model year. Originally, the car was a “consolation prize” for Pontiac, which had desired to produce a two-seat sports car based on its original Banshee concept car. However, GM feared this would cut into Chevrolet Corvette sales, and gave Pontiac a piece of the “pony car” market through sharing the F-body platform with Chevrolet. 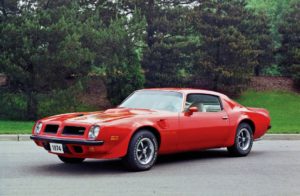 The prices for the second-generation Trans Am have gone nuts, the 1969 convertible Trans Am remains the rarest and most valuable. Pontiac made just eight, all powered by the standard 335 hp 400 HO engines. Four of them got four-speed transmissions.
These cars are worth $1.2M in Concours #1 condition.

Although GM made T-tops didn’t appear on the Firebird until 1976. Every Black and Gold Limited Edition model commemorating Pontiac’s 50th Anniversary was supposed to leave the factory with two removable Hurst panels, but production problems limited them to just 643 of the 2,590 cars built. 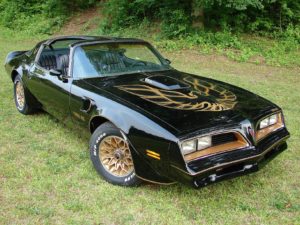 Pontiac created the iconic black and gold color scheme to commemorate its 50th anniversary and revealed it at the Chicago Auto Show in February 1976. The color combo was available as option code Y82 in 1976. Designer John Schinella created it, drawing inspiration from the John Player Special livery of the Lotus Formula 1 cars.
The paint scheme, with its elaborate pinstriping, would remain available on Trans Ams until 1981.