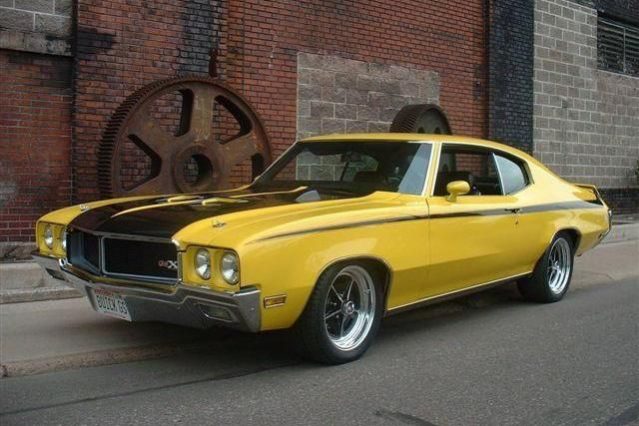 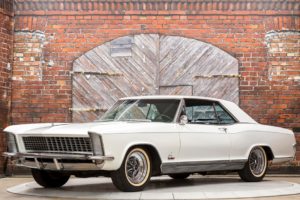 Some consider the first Buick Riviera, built from 1963 to 1965, to be the best-looking car General Motors has ever produced. And in the design’s final year it was perfected with hidden headlights and the availability of Buick’s first high-performance Gran Sport package—option code A9.
Under the hood was a new 425-cubic-inch Super Wildcat version of the Nailhead V-8. Equipped with two four-barrel 600-cfm carburetors the Nailhead made 360 hp and 465 lb-ft of torque at just 2800 rpm. The 425 engine was larger and more powerful than the Nailhead on the Skylark GS-400.

Only 3354 Riviera Gran Sports were built in 1965, all with the Super Turbine 400 three-speed automatic transmission. 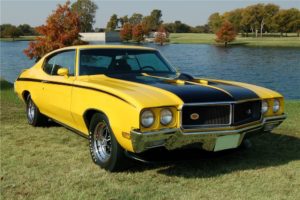 Just like Oldsmobile, Buick went with 455 cubic inches in 1970, and there were two available; the standard GS-455 and the Stage 1.
The standard engine in the Gran Sport and the GSX was rated 350 hp and 510 lb-ft of torque.
However, the 455 Stage 1, which cost just $115 extra, was the pinnacle of Buick’s performance at the time. The Stage 1 engine included different cylinder heads with larger valves, a higher compression ratio, and a more aggressive camshaft.
Buick radically underrated the engine at 360 hp at 4600 rpm and 510 lb-ft of torque at 2800 rpm—the most twist of any production motor at the time.

All GS Buicks came with functional ram air scoops in their hoods as standard equipment and the Stage 1 machines were some of the quickest muscle cars built in the era. Buyers looking for more pizazz to rival their friend’s GTO Judge
could order the GSX package which was available in Apollo White or Saturn Yellow.
With its wild colors and black stripes, the GSX with the optional Stage 1 engine was the ultimate Buick muscle car and the price tag showed it at over $4500.
Of the 678 GSX Stage 1 cars built in 1970, 400 got the Stage 1 engine, and of those 118 got Muncie four-speeds. 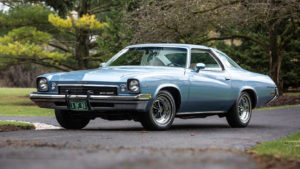 Buick closed out the original muscle car era strong. The GSX didn’t make it past 1972, but the Gran Sport and the Stage 1 engine did. In 1973, the Gran Sport was now on the redesigned “Colonnade” Century, and it was a looker.
Four engines were offered, two weak 350s and two 455s. Remember, in 1972 the horsepower ratings went from “gross” to “net” and were down significantly. The first 455 was rated 225 hp, which was healthy for 1973, but the optional Stage 1 version of the engine was rated 270 hp.
Buick’s last significant muscle car of the 1970s was available with a Turbo 400 or a Muncie four-speed and the four-speed cars are rare.
Only 728 were built in 1973 with the Stage 1 engine and 92 of those with four speeds. In 1974 production dropped to just 478 Stage 1 cars. 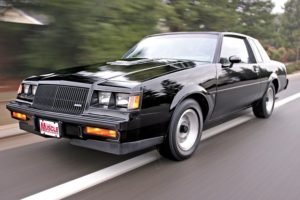 The turbocharged Buick Regal Grand National first appeared in 1982, followed a year later by the T-Type.
But nobody really cared until 1986 when Buick added an intercooler to the V-6’s induction system and began eating Corvettes with the upright two-door coupes. This combination was available 1986-87, and it powered the black Grand Nationals, as well as the T-Types and other Turbo Regal models, which could be ordered in any color or combination available. In 1986 the engine was rated 235 hp and it was bumped up to 245 hp in 1987 just to piss off the Corvette engineers down the hallway. Demand took off in 1986 when word got out that these Buicks were the quickest things on the street, but then GM announced that 1987 was the final year for the combination and sales exploded.
Buick sold 7896 turbo Regals in 1986, including 5512 Grand Nationals. In 1987 it sold over 20,193 Grand Nationals alone. 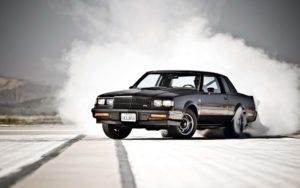 And when it was all over Buick’s engineers sent their beloved rear-wheel-drive, turbocharged Regal out with a mushroom cloud.
They pulled 547 Grand Nationals off the assembly line and sent them down the road to ASC/McLaren where they were converted into the Grand National to end all Grand Nationals, the grand high exalted GNX. Modifications included a new rear suspension, 16-inch wheels and tires, wheel well flares, fender vents, and performance instrumentation.
The engine was tweaked up too, getting a ceramic turbine for the turbo, more boost, and a specific tune.  With 276 hp and 360 lb-ft of torque, it was the meanest car GM built in the 1980s and it has become the most important American collector car from the decade of big hair and Bon Jovi with prices regularly over $100,000 for the best examples. And for good reason.
Able to run 0-60 mph in 5.5 seconds and the quarter-mile in 13.43 seconds at 104 mph the GNX wasn’t just quicker than IROCs and other ‘80s muscle cars, it’s the quickest factory stock car on this list.

A little Info on the Sunbeam Tiger
February 24, 2022
Part 5 of 5-part Series/ MDL modified TKX in to a ’67 Chevelle
February 18, 2022
Go to Top
We are currently working with a new telephone system. Thank you for your patience!
+