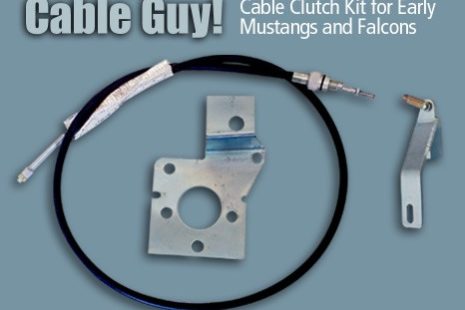 Swapping a T5 overdrive manual transmission into an early Mustang or Falcon (or their Mercury cousins) has never been more popular. We first did this swap in our ’67 Mustang several years ago, but since then countless others have also made the conversion to the modern day five speed for the sake of better fuel economy and faster acceleration.

For many of you the swap was a no brainer -your car was already a manual and you simply purchased the necessary conversion parts, the T5, and bolted it up. Your mechanical clutch linkage worked just fine, though not nearly as smooth as the cable or hydraulic mechanisms typically found in a late model, T5 equipped, Mustang or Thunderbird.

For some of us the conversion was a little more challenging due to the fact our cars were originally equipped with an automatic transmission. Hence we had to source the rare, and expensive, clutch pedal and associated linkage. Many of us ended up modifying parts from other model years, or scrapping the swap all together. Undoubtedly there are a good number of people still on the sidelines waiting to get into the T5 game, but are unable to due to the growing scarcity of mechanical linkage components for their vehicles.