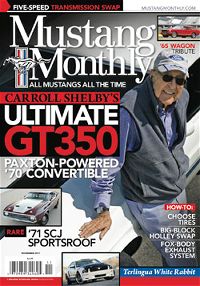 Check out the November 2011 issue of Mustang Monthly for a full installation tutorial of a T5 into a ’67 GT350 Clone.

TheseMustangs have all the same options as the 1965-66 Mustangs.  In addition to the T5, the TREMEC TKO-500 and TKO-600 transmissions are available as they will fit within the larger tunnels.

These transmissions are larger and heavier than a T-5 or four-speed and require more room in the transmission tunnel found in these larger cars. The TREMEC 3550 and TKO500 have the same bolt pattern as 3 or 4 speeds but have the same longer 10 spline input shaft as the T-5. The reason the input shaft is longer is to provide the additional clearance needed for the cable operated bellhousings used in Fox-body Mustangs.  The 10 spline input shaft may be an advantage if you are trying to preserve a clutch used with the 4 speed.  However, if the clutch is not a concern then the TKO600 is the best choice for high horsepower or big block cars.

Shifter location on a T5 or TKO lines up with the opening in the floor with a conventional long input shaft.  With the shortened input shaft the shifter is slightly forward requiring a little more clearance of the tunnel.  It is not recommended to use the shortened input shaft with cars with consoles as the shifter is moved too far forward relative to the console.  Some of the additional parts needed to swap a TKO into a ’67-’70 or ’71-’73 Mustang/Cougar is a TKO cross member, as the mounting position is further back, a shorter speedo cable, speedo gear and shifter lever and ball.

For Mustangs making more than 450hp, the TREMEC TKO and TKO600 is the next step up with a 26 spline input shaft and a 31 spline output shaft.  The overall layout is the same and again with a shortened input shaft, the TKO can be bolted to any small or big block early bellhousing.