The Shelby GT350H was a special promotion, dreamed up between Ford, Carroll Shelby, and Hertz rent a car.

It’s a little absurd that in 1966 you could rent a powerful muscle car, and the Shelby GT350H was powerful. Each associated company had their own reasons for agreeing to participate in this. For Shelby and Ford, this was a great way to let customers test out a GT350 before they purchased one. For Hertz, this was a plan to revive their Sports Car Club.

SHELBY AND HERTZ TEAM UP

The Hertz Sports Car Club established in ‘58. The idea was to put high-performance, special-edition Shelby Mustang coupes into the hands of racing enthusiast-minded rental customers. In order to be a member of the club, you had to demonstrate your ability to drive a sports car on crowded city streets.

In ‘65, Ken Miles took Shelby GT350R to victory, and eventually, it became the SCCA B-Production champion. The SCCA Championship caught the attention of Hertz, who needed something to save the Sports Car Club.

Not many people had the opportunity to try out a GT350. Renting a sports car was more expensive than renting an average sedan.

Working with Hertz gave Shelby who was not one to say no to an advantage in promoting his new car to do just that.

Hertz received a better deal on their Shelbys than Ford dealers did at the time. They were paying the same $3,447 that dealers did, but Shelby agreed to throw on the stripes for free. As an additional way of sweetening the deal, Shelby also guaranteed that the cars would not depreciate more than 2.5 percent per month.

Hertz was thrilled, and after the upper management got to drive a GT350, they were in love. They expanded their order and the GT350H became a remarkably popular program advertised as ‘Rent A Racer’. 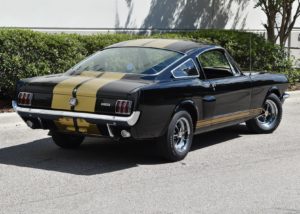 Over 50 years ago, in September of 1965, the General Manager of Shelby American, Peyton Cramer, and the Hertz Corporation came to a brilliant business agreement:

They would offer the 1966 GT350-H as a rental car through the now-famous Hertz “Rent-a-Racer” Program. This deal created 1,000 Shelby Mustang GT350-Hs for use in the Hertz rental fleet, allowing customers to do more than just rent a standard rental vehicle for their needs.

The ad read,
“ There are only 1000 of these for rent in the entire world. Hertz has them all.”

The “Rent-a-Racer” Program inspired more customers to rent with Hertz (who wouldn’t jump at the opportunity to rent their dream car for the weekend?), while also creating more potential buyers for Shelby Mustang – talk about a genius business idea.

Members of the Hertz Sports Car Club in 1966 who were 25 years of age or older would simply pay $17 per day and 17 cents per mile (a pretty great deal for the time) and get to drive away from the Hertz lot in a performance 306 horsepower Mustang fastback. For most drivers, this was a chance to sit in the driver’s seat of a luxurious and powerful vehicle for a great deal—when purchasing that model may have been out of their price range.

The first 85 Hertz Shelbys were identical to the regular 1966 GT350s, except for their paint pattern. The Hertz Rent-a-Racers were almost all black with gold Le Mans style stripes, Hertz’s colors. Just like the GT350s, they had a manual transmission. 1,000 produced with 1 prototype.

Then a few of these rental cars came back after running at SCCA events.
They had roll bars welded into them, which in hindsight was probably a dead giveaway that the drivers had not adhered to the rental agreement contract. There were also reports of drivers burning out the clutch. The remaining GT350Hs were made with automatic transmissions. Some of these were swapped out after renting the cars to a manual for the weekend & then swapped back in before return.
The automatic GT350H was still no slouch, and Shelby himself kept one of these for his personal stable, oddly it was White with Blue stripes. 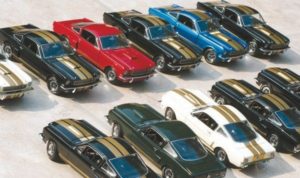 800 Hertz Shelbys were black with gold stripes there were limited numbers available in Sapphire Blue, Candy apple Red, Ivy Green and Wimbledon White all with gold stripes.
GT350Hs also had wheel-center caps that featured the Hertz logo, a side stripe that read GT350H and Goodyear Blue streak tires.

The GT350H used competition brakes, which were unusual and confused many early renters. These brakes used a metallic brake pad and lining. Though this made them an ideal choice for heavy racing, they usually didn’t get warmed enough to be useful during normal street driving.

A placard sticker was added on the inside letting people know that the vehicle was equipped with competition-grade brakes and that it might be necessary to use more brake pressure. A power brake booster was added to some units after customers complained that it was too hard to brake.

LEGACY FOR SHELBY AND HERTZ

All told, Hertz ended up making a little over 1.25 million on the whole enterprise, and Shelby ended up becoming a household name. Prior to this initiative, you would have only heard of Shelby-American if you were a west-coaster, and even then, only if you spent your weekends at the track.

Every once in a while, you can see Shelbys in the movies if you’re paying attention.
The GT350 H is in a few movies like Grand Prix, American Gangster, War of The Worlds.

Hertz has tried to run similar programs since, but few have had the success that the original Rent-A-Racer program saw.

After the promotion ended, these Shelbys were sold to the general public through Ford dealers. It’s rumored that some of the GT350 Hertz models lost their high-performance parts on the way to the sales floor, but they also cost less than half of what a brand new GT350 did, and most of the rumors about these cars being abused have been greatly exaggerated.

These cars today are considered rare collector’s items, and finding one in a barn, even in a miserable condition, is something Mustang enthusiasts dream about. Most of the people who have found them have been careful about restoring them to like-new condition, helping to preserve this chapter of Mustang and Shelby-American history.

A little bit about the SHELBY DAYTONA COUPE
September 3, 2021
Go to Top