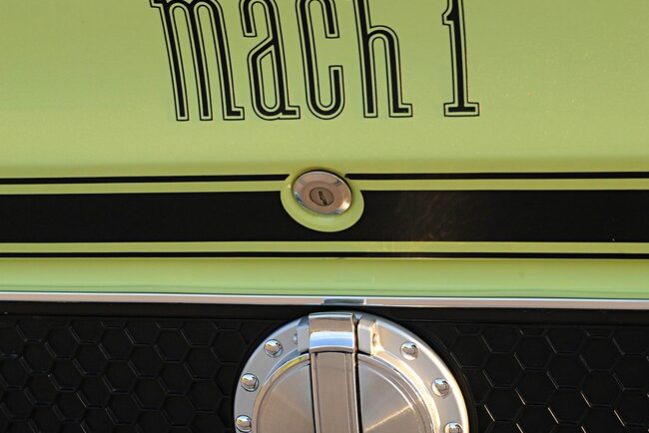 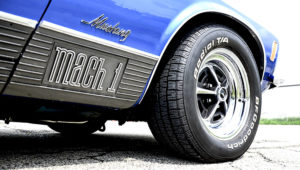 A performance-oriented option package of the Ford Mustang, originally introduced by Ford in August 1968 as a package for the 1969 model year. The Mach 1 title adorned performance oriented Mustang offerings until the original retirement of the moniker in 1978, returning briefly in 2003 and 2004.

As part of a Ford heritage program, the Mach 1 package returned in 2003 as a high-performance version of the New Edge platform. Visual connections to the 1969 model were integrated into the design to pay homage to the original. This generation of the Mach 1 was discontinued after the 2004 model year, with the introduction of the fifth-generation Mustang.

Calling back Chuck Yeager’s feat becoming the first to break the sound barrier – Mach 1 – Ford delivered its original Mach 1 in 1969, setting 295 speed and endurance records in its first model year at the Bonneville Salt Flats. Thanks to its added handling capability, Mach 1 teams earned back-to-back SCCA Manufacturer’s Rally Championships in 1969 and 1970. 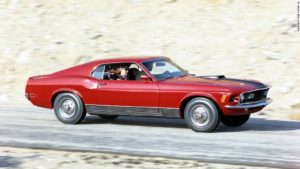 All first-generation Mach 1’s are distinguished by the body style code 63C on the door data plate.

The Mach 1 package was only available in the “SportsRoof” trim

True to its name, the Mach 1 package stood for speed and performance, ranking among the top tier of the brand’s legendary performance offerings. Available only in the SportsRoof body style, the 1969 Mach 1 featured a host of cosmetic changes that separated the performance package from other fastback Mustangs. 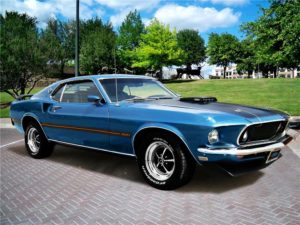 The black hood stripe, chrome exhaust tips, and a Shaker hood scoop were some of the many distinctive aesthetic modifications that wowed the masses from day one. The sporty exterior combined with the 351 CID engine under the hood allowed the Mach 1 to stand out from the crowd, both visually and performance-wise.

The 5.8L V8 Windsor motor was standard equipment, with a quintet of additional engine options later becoming available, including two different 428 CID in (7.0L) V8 engines. The 4-barrel Q and R-Code motors could push out up to 335 hp and 440 lb-ft of torque at 3,400 RPM.

Speaking of choices, unlike other special edition Mustangs, the Mach 1 was completely customizable. If there’s one thing that muscle car fans love more than speed, it’s flexibility, and the Ford Mustang Mach 1 allowed Ford fans to get creative. Along with the six engine options, Mach 1 owners could select one of sixteen distinct exterior colors, three interior colors, five transmissions, and ten different axle types, creating hundreds of different potential combinations.

One of the most recognizable features of the ’71-’73 Mach 1s is the hood design with dual scoops.
The hood was a no-cost option on the 302 cars and standard on all others.
The basic NASA hood came as a non-functional item, but when ordered with the Ram Air option, it became truly functional. The Ram Air option included a vacuum controlled door inside each scoop, and a fiberglass under-hood ‘plenum’ that directed cool, outside air through a modified, rubber-ringed air filter housing and into the carburetor.
The ram-air option also included a pair of 1970 Mach1-style chrome twist hood locks and a two-tone hood paint treatment in either ‘matte black’ or ‘argent’ (matte silver), which coordinated with the decals and striping. The option also received either a “351 RAM AIR” or “429 RAM AIR” decal on each side of the hood, depending upon the engine ordered.

In 1972, the 429CJ & SCJ engines were dropped from the lineup, and horsepower ratings dropped across the board due to the switch to new SAE net horsepower calculations and a 4-degree camshaft retard built into the timing set. This year also produced the fewest Mach 1 sales of the 1971-73 generation. There are no major differences in the ’71 and ’72 Mach 1s externally. The ’72 Mach 1 also saw the deletion of the pop-open gas cap, which was replaced with the standard twist-on cap found on the other Mustang models that year. The 302 Windsor remained as the base Mach 1 engine. There were again three 351 Cleveland engine options for ’72. A 2 barrel, the 4 barrel 351CJ, and a new for ’72 R-code 351HO, essentially a lower compression Boss 351 engine.

The Mach 1 received some significant appearance updates for 1973. The lower body accent paint and bright trim were gone and the entire car was one color top to bottom. All ’73 Mach 1s received a wide body-side tape stripe in either black or argent, that featured a “MACH 1” cutout on the front of the quarter panel, and a standard “MUSTANG” script emblem on the fender. The decklid tape stripe was revised, with the “MACH 1” lettering now incorporated into the passenger side of the stripe, instead of centered above it as in 71 & 72. The valance cutouts and bright tips were no longer available on 4V cars for 1973. 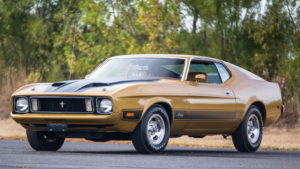 The Mustang needed to comply with new NHTSA standards, which necessitated a redesigned front and rear bumper. The front bumper on all models was now a much larger body-colored urethane unit, mounted on impact absorbing struts. Due to the revised bumper, the Mach 1 sport lamps were deleted and all models had the park/turn signal lamps moved from the front valance up to a vertical orientation at each end of the grille. The Mach 1 grille was black with a honeycomb pattern and a small running horse tri-bar emblem. The rear bumper was mounted on extended brackets which caused the bumper to protrude from the body further and yielded a large gap.
To rectify this, Ford used a body-colored urethane filler piece at each quarter panel, and a sheet metal filler panel bolted to the taillight panel.

Engine options remained virtually the same as in 1972, with the exception of the 351HO being dropped. The 351-4V was not advertised in the ’73 Mustang as a Cobra Jet engine even though the 1973 Ford shop manual and other internal Ford documentation did reference the engine as the 351-4V CJ

Due to trouble getting the Ram Air option approved for emissions reasons, the 351-2V was the only engine available with Ram Air. New for ’73, Ford offered a “Tu-Tone” hood paint treatment option that consisted of the black or argent paint treatment and twist locks, but without the actual functional components of the Ram Air system.

The Mach 1 name continued with the advent of the Mustang II in 1974.

With the automotive industry reeling as a result of the Middle Eastern oil embargo and new emissions laws in the United States, Ford elected to completely change course for the Mach 1 and for the Mustang as a whole in 1974.

Fastback Mustangs were a thing of the past beginning in 1974, and the latest Mach 1 was reimagined as a hatchback for the first time in the pony car’s history. 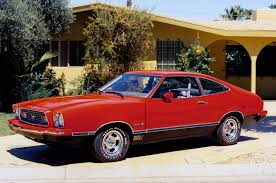 The 302 Windsor returned in 1975, rated at 140 hp (104 kW) and 240 lb-ft (325 N⋅m) of torque, giving the Pinto platform a notable performance boost. Also available was a 4-speed manual.
The newly-designed Mach 1 Mustang earned praise for its handling among other attributes.
The Mach 1 remained mostly unchanged in 1976, as a new performance model – the Cobra II – was introduced alongside. 1977 proved to be the weakest sales year of the Mach 1 to date, selling only 6,719 units.
The nameplate remained for one more year, upon when it was discontinued, the advent of the third-generation Mustang in 1979.

The Mach 1 was very distinct from other Mustangs as it drew heavily from the 1970 Mach 1.

Further differences included the use of Ford’s 8.8 in (223.5 mm) solid rear axle with a 3.55 final ratio (As opposed to SVT’s Independent Rear Suspension) also the availability of a 4 speed automatic in addition to the Tremec sourced 5-speed manual

During the 1990s, the preeminent performance Mustang was the SVT Cobra. Following the departure of the Fox chassis in 1993 and the arrival of the SN-95 in 1994, Ford also sought to eliminate the 302, which would not occur until the 1996 model
The 32-valve 4.6 V8 used in the Mustang Mach 1 was originally introduced in the 1993 Lincoln Mark VIII, however, for the Mach 1 it was re-engineered with a free-flowing exhaust and intake manifold to increase the engine by 30 horsepower. Below the SVT in performance was only the GT, reintroduced in 1982 with the 302 HO “5.0”, later turning to the 16-valve SOHC V-8 in 1996. The sales on the new SN-95 style cars increased so that by 2002, Mustang sales topped the combined sales figure of the Firebird and the Camaro. 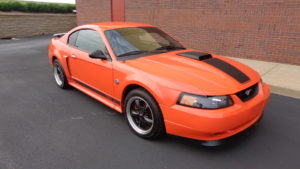 Unlike many ‘limited editions’ cars2003 Mach 1 owners had a variety of stand out colors from which to choose. Originally, the cars were offered in Black, Dark Shadow Grey Metallic, Torch Red, Zinc Yellow, Oxford White, and Mach 1–only Azure Blue.
In 2004 Zinc Yellow was dropped as an option and replaced with a more vibrant yellow called Screaming Yellow, as well as an all-new color called Competition Orange.

Limited in production, the 2003 and 2004 Mach 1s ended with the New Edge body platform, the discontinuation of the Fox framed unibody, and the introduction of the first new frame design since 1979 the s-197 with 9,652 2003’s and 7,182 2004’s being built, contrary to the Mach 1 originally being advertised as a one-year limited-run model with production set at 6,500 cars. They will increase in value as good representations are left un-wrecked.

RETURN OF THE LIMITED-EDITION MACH 1
THE PINNACLE OF MUSTANG 5.0-LITER V8 STYLE & PERFORMANCE 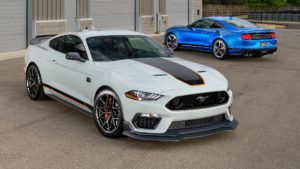 The all-new Mustang Mach 1 is set to become the most track-capable 5.0-liter Mustang ever, courtesy of a newly designed front end, plus Ford Performance parts from Mustang Shelby GT350 and Shelby GT500 models and an available Handling Package for greater at-limit handling.

The all-new version leans on decades of Ford Performance learnings, wearing a uniquely crafted front end for aerodynamic efficiency and a host of Ford Performance parts that help celebrate its iconic heritage. Mach 1 comes standard with a Treme 3160 6-speed manual transmission from the Shelby GT350. For the first time, Ford has outfitted the system with rev-matching, and the transmission is paired with the GT350 oil cooler system and Mustang GT’s twin-disc clutch and a short-throw shifter.

The all-new Mach 1’s grille harkens back to the original with a deep 3-D mesh, shark-nosed section, and faux lamp elements. Flanking the fascia are new side grilles below each turn signal lamp. A low-gloss Magnetic pony badge is centered on the grille. Low-gloss magnetic and black accents throughout the vehicle provide a premium look while staying true to Mach 1’s bold, muscular heritage, including low-gloss Magnetic mirror caps and rear spoiler. 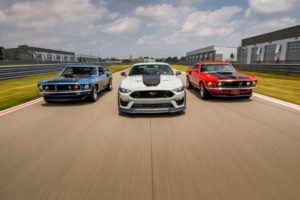 The Mach 1 engineering and design teams worked in tandem to develop a front end unique to the Mach 1 persona that also meets the high aerodynamic demands of the engine, transmission and braking systems.

A front splitter optimized to the fascia shape improves track performance and provides a more aggressive appearance, while a matched rear spoiler works in concert to create an ideal life balance. Mach 1 features 22 percent more downforce than a Mustang GT with Performance Pack Level 1 and the downforce improvement jumps to approximately 150 percent with the Handling Package.

To enhance track endurance, the team added two side heat exchangers – one to cool engine oil, the other transmission oil – as well as a rear axle cooling system and lower diffuser from Shelby GT500.

A new underbelly pan, the vehicle’s most aerodynamically important upgrade, extends 20 inches further rearward than on a Mustang GT Performance Pack to smooth and increase the airflow under the front of the car. Large underwing features in the belly pan increase downforce, while special belly pan airfoils in the brake cooling ramps improve downforce and assist the brake cooling flow – a first for Mustang.