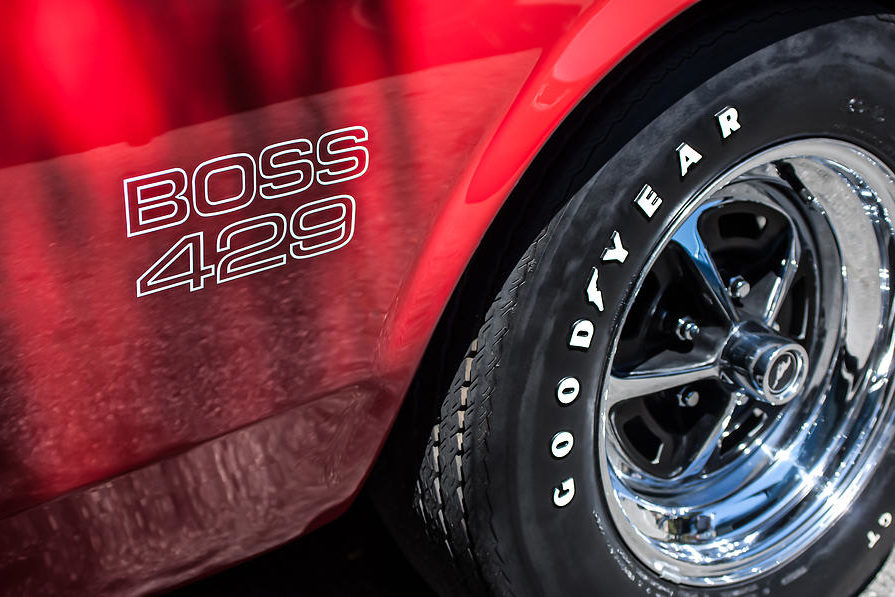 The Boss 429 is recognized as being among some of the rarest and highly valued muscle cars to date. In total there were 1359 original Boss 429s made. 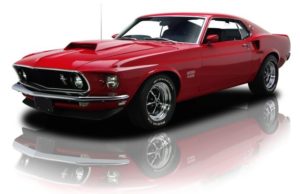 The origin of the Boss 429 was to fulfill Ford’s need to homologate the 429 semi-hemispherical engine for NASCAR racing. Ford was seeking to develop an engine that would better compete with the 426 Hemi from Chrysler in NASCAR’s Grand National Division, now known as the Monster Energy Cup Series.
NASCAR’s homologation rules required that at least 500 cars be fitted with this motor and sold to the general public. After much consideration, it was decided by Ford that the Mustang would be the car that would house this new engine.

Succeeding the FE engine family, Ford developed multiple high-performance versions of the 385-engine family from 1969 to 1971, all based on the 429.

The Boss 429 engine evolved from the Ford 385 engine. It used four-bolt main caps, a forged steel crank and forged steel connecting rods. The engine featured aluminum cylinder heads, with a semi-hemispherical type combustion chamber which Ford called the “crescent”. These heads used the “dry-deck” method, meaning the coolant circuit for the block was separate from the cooling circuit for the head The “dry-deck” method of design is intended to strengthen the block by removing the open coolant jackets around the cylinder and reduce hot spots by providing more direct cooling. Each cylinder, oil passage, and water passage had an individual “O” ring style seal to seal it tight. Although a head gasket is used, it only seals the cylinder for combustion so a failure at one point won’t compromise the others. 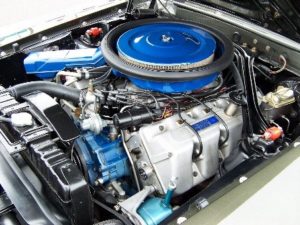 The Boss 429 engine came standard with a single Holley 4-barrel carburetor rated at 735 CFM mounted on an aluminum intake manifold that flowed well for its time.
1969 cars featured a hydraulic lifter camshaft while 1970 models got a mechanical lifter camshaft along with an improved dual exhaust system, though rated power output stayed the same.

The Mustang’s engine compartment was not wide enough to accommodate the massive Boss 429 engine.
As a result, Ford contracted with Kar Kraft of Dearborn, MI to modify 4-speed Cobra Jet Mustangs to accept the new Boss 429 Engine. Kar Kraft was a Ford exclusive experimental facility that functioned as Vehicle Engineering for Ford’s Special Vehicles. Kar Kraft had previously developed the first GT40 MKII (winner of the 1966 24 Hours of Le Mans) and designed and built the GT40 MKIV (winner of the 1967 24 Hours of Le Mans).

Production of the Boss 429 began in 1968 at Kar Kraft’s new assembly plant in Brighton, Michigan; the cars were transported to this plant directly from the Ford Rouge plant. The new, revised, front apron assemblies that accepted the large Boss 429 engine had been installed by the Rouge plant as the base vehicles were being built; this produced a stronger and cleaner front structure. The reworked front fenders were also installed at the Rouge plant.

Next, the battery was relocated to the trunk and a 3/4″ sway bar was added to the rear end to improve handling because the car was now nose-heavy. This was the first Mustang ever fitted with a rear sway bar, and so it handled much better than the other large engine Mustangs of the time, making it a much more capable track car. It came fitted with an 8,000rpm tachometer, and AM only radio. In addition, a hole was cut in the hood, and a manually controlled hood scoop was added to these cars. Other features included a front spoiler that was shallower than the Boss 302 spoiler, color-keyed dual racing mirrors, and an engine oil cooler. It was also equipped with a 3.91 ratio rear axle with a “Traction-Lock” limited-slip differential.

The cars were advertised at 375 bhp (380 PS; 280 kW) at 5200 rpm and 450 lb-ft (610 N⋅m) of torque at 3400 rpm. Supposedly, the manufacturers and dealers only listed 375 hp (280 kW) because of legal issues and rising insurance costs so customers would be lured into buying these cars without the stiff fees from an insurance company, though no manufacturer has ever stated this to be true.
Period dynamometer testing, however, supports Ford’s rating. The speed equipment manufacturer Crane Cams tested engines that were stock as manufactured, with the exception of substituting tubular headers for the stock cast iron exhaust manifolds. For the 1969 hydraulic cam engine, they measured a peak of 352.0 bhp (262 kW) at 5500 rpm. The 1970 mechanical cam engine measured better, with a peak of 366.5 bhp (273 kW), also at 5500 rpm.

Both model years featured a toned-down exterior, as compared to other Mustangs of the era (see Boss 351, Boss 302, Mach 1), in that the only external identification of the car was the Boss 429 decals on the front fenders and unique enlarged hood scoop. The rest of the car featured a very clean look that was atypical of most Mustangs that Ford had produced, which could be deceiving to some people. Source: Don Eichstaedt, Resident Engineer Kar Kraft Brighton Assembly Plant – 1969/70 Kar Kraft – 1966/1970 Ford Motor Company – 1971/1991 To show just how special these cars were, they were given special NASCAR identification that was placed on the driver’s side door. Each car was given a “KK” number which stood for Kar Kraft. KK #1201 was the first Boss 429 and KK #2558 was the last Boss 429 made.

Unfortunately, sales started to drop off for the 1970 Boss 429 Mustangs and with higher production costs, gas costs, and other internal Ford problems, it was decided that 1970 would be the last year of the Boss 429.

In 1969 there were 859 Boss 429s made by Ford Motor Company, two of which were Cougars for the Lincoln/Mercury Race Division.

(As the Super Stock ranks featured more and more factory support in the late 1960s, Ford, looking for a competitive edge against Chrysler, commissioned skunk-works builder Kar Kraft to build two 1969 Boss 429 Mercury Cougars and then sold them to drag racers “Dyno Don” Nicholson and “Fast Eddie” Schartman for the princely sum of $1 each.)

’69 models were available in five different colors  (Raven Black, Wimbledon White, Royal Maroon, Candy apple Red, and Black Jade), and the only color for the interior was black.
The fully functional hood scoop was the same color as the car, and noticeably larger than anything else offered on any Ford product at the time, with the exception of the two Boss 429 Cougars. This scoop would carry over to the 1970 model year but would be painted black on all cars. To this day, it is the largest factory hood scoop ever installed on a factory-produced Mustang.
All these cars were manual transmission, and there was no air conditioning available due to the size of the engine. Though not originally offered as an option, it is common to add a spoiler and window louvers commonly seen on the 1969–1970 Mach 1’s and Boss 302’s. Some early cars were known as “S” code cars and as such had a slightly different engine. These cars had magnesium valve covers, NASCAR style forged internals, nearly no smog or emissions equipment, and are said to be more powerful than the later “T” and “A” code engines (which had the emissions related equipment) to satisfy government regulations. The engines in some cases were removed from the cars for use in other applications such as tractor pulling, due to the extreme torque and horsepower the engine was capable of producing.

In 1970 there were 499 Boss 429s made by Ford Motor Company. There were five new exterior colors (Grabber Orange, Grabber Green, Grabber Blue, Calypso Coral, and Pastel Blue) and the interior was available in black or white and black. The hood scoops for this year were all painted matte black regardless of the color of the car.
These cars also had a manual transmission with Hurst shifter standard, and no AC was available, again due to the size of the engine. 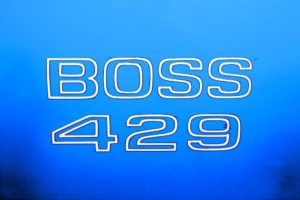 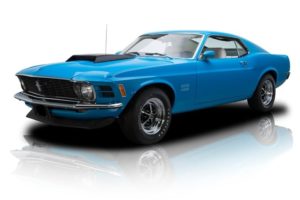