WHAT IS THE MUSTANG COBRA II?

In a way, perhaps no one variant illustrates the perceived missteps of the second generation “Mustang II” than the Cobra II. Produced for three years between 1976 and 1978, the Cobra II offered little of substance over the stock pony cars. That being said, the Cobra II sports a classic look reminiscent of the Shelbys of the ‘60s and early ‘70s, and it has benefited greatly from the current resurgence of interest in this often-neglected period of Mustang history.

In order to properly appreciate the Mustang Cobra II, a little perspective is necessary. When the first-generation pony cars were phased out in 1973, the brand had been declining in popularity in recent years due to the emerging oil crisis. The Mustang II was an attempt to scale back the ambitions of the car, offering something for budget-conscious consumers who wanted a sporty car that wouldn’t guzzle gas like the big block V8s of old. One thing that is often forgotten in revisionist histories of the pony car is that the Mustang II was initially a success, selling almost 300,000 units and being named Motor Trend’s Car of the Year.

However, consumer tastes quickly changed again with the end of the oil crisis, and Ford found itself without a true contender to the muscle car throne. 1975 saw a V8 return to the lineup and the following year, the Cobra II package was introduced.

ABOUT THE COBRA II

Available on the four-cylinder and V6 models in addition to the V8, the Cobra II offered front and rear spoilers, a blackout grille, a non-functional hood scoop, and racing stripes. Available colors included white with blue stripes, blue with white stripes, and black with gold stripes.
The Cobra II package was only available for fastback models. 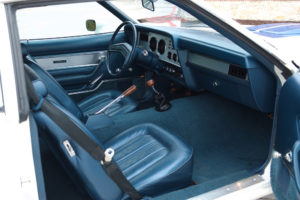 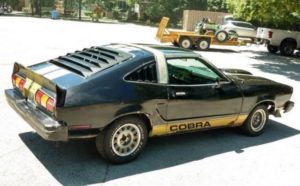 A $325 option (plus an additional $287 required for a “Cobra Modification”), the Cobra II package was produced and installed by Motortown, a company owned by legendary auto exec Jim Wangers. The Cobra II even managed to earn some racing credentials when an unauthorized, heavily modded version was run in the International Motor Sports Association (IMSA) GT class. 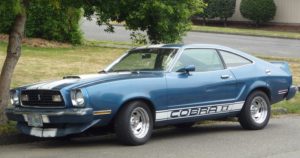 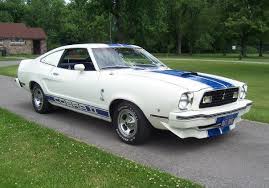 It wasn’t the Mustang II generation that Ford officially developed the Mustang Cobra. The first Mustang Cobra arrived in 1976 and was named the Cobra II. The Cobra had a hood scoop and racing stripes, plus functional rear spoilers. The 1977 and 1978 Cobras offered small style changes and slightly improved the engine, along with other options. 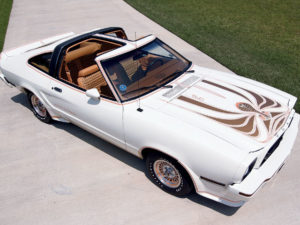 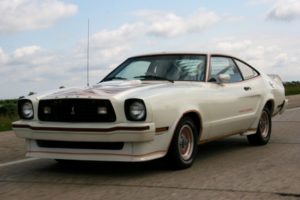 This Cobra deserves its own section. The 1978 model was the “King Cobra” which included a large Cobra decal on the hood with an optional V8. It was the best Mustang II variant around and a future classic. The 302-cubic inch (5 liter) V8 was the only engine option for the 1978 King Cobra. The V8 wasn’t much over the standard Mustang II, producing 139 hp, but it did look awesome and that counts for something.

the King Cobra was pretty solid design-wise and had everything it needed to stand out in the parking lot. Priced at $1,277, the option added accent striping, “King Cobra” badges and lettering, and a massive cobra decal on the hood.

The King Cobra also came with a rear deck spoiler, a massive front bumper, a front air dam, and a hood scoop. While the scoop was nonfunctional, the air dam was real and fed cooling air to the power-assisted front braking discs. Other standard features included power steering, 13-inch aluminum wheels in Goodyear radials, a sport steering wheel, adjustable shocks, and a rear stabilizer bar.

Despite not being as fast as it looked, the King Cobra was praised for its sporty appearance and good handling. In many ways, the King Cobra confirmed that sometimes image is everything when it comes to performance cars. The same applies today when the King Cobra is arguably the most sought-after version of the second-generation Mustang.