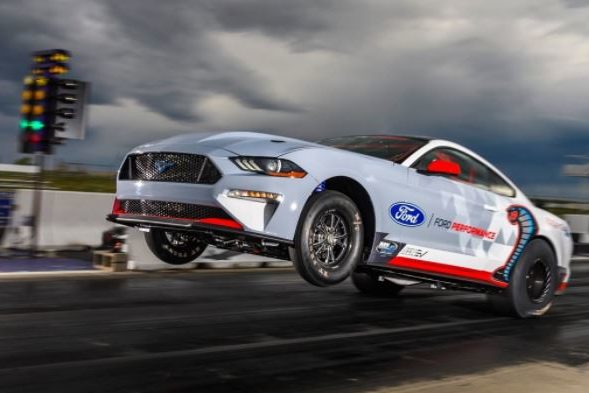 Ford has created an all-electric Mustang Cobra Jet 1400 that destroys a quarter-mile in the “low 8-second range” at more than 170 mph, the company revealed Thursday.

This is not a car that any Joe can buy.

This is a one-off demonstration prototype designed to prove out Ford’s electric innovation. The dragster is built for Ford Performance, and the future of the vehicle has not been disclosed.

“This is a pinnacle of innovation in electric vehicles,” said Emma Bergg, manager of global EV communications. “Racing has been a great way to drive and test new technologies and new development and this project is no exception. The ‘1,400’ comes from the target horsepower that was set for the project at the beginning.”

In fact, the battery-powered Mustang is projected to deliver more than 1,400 horsepower and more than 1,100 ft.-lbs. of torque to demonstrate the capabilities of an electric powertrain on the racetrack.

Following the debut in 2019 in Los Angeles of the Mach-E SUV, which has inspired a surge of early reservations, this is another bold move by the automaker to highlight its commitment to electrification of its most iconic nameplate.

The latest iteration is an effort by Ford to honor the past, when the original Cobra Jet “dominated drag strips in the late 1960s and still is a major force in sportsman drag racing today,” the company said in a news release.

Mark Rushbrook, global director, Ford Performance Motorsports, said in a statement: “We saw the Cobra Jet 1400 project as an opportunity to start developing electric powertrains in a race car package that we already had a lot of experience with, so we had performance benchmarks we wanted to match and beat right now.”

Ford Performance is eyeing a world debut later this year at a drag racing event, as soon as authorities allow drivers to return to the racetrack. The current pandemic has created short-term uncertainty.

For now, speed junkies can catch a sneak peek of the car’s performance at an on-demand Motor Trend episode of “Hard Cell” aired on Sunday, April 26.