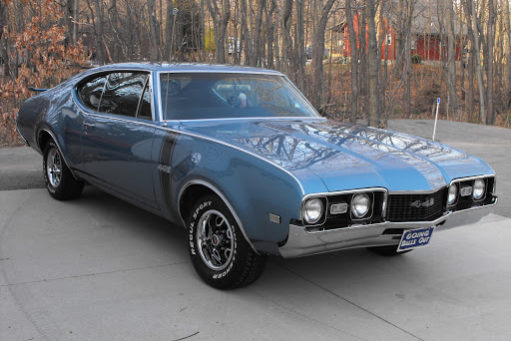 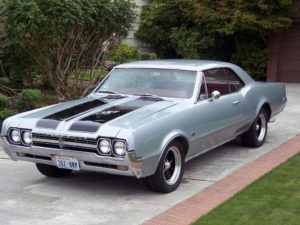 In 1966 Oldsmobile upgraded the engine option for the 442 to a 400-cubic-inch V-8 with three two-barrel carburetors and introduced its first W-30 package.
The standard 442, with a single four-barrel, was rated 350 hp. With tri-power induction, that rating jumped to 360 hp, which matched the GTO, and it pegged the cool meter when you opened the hood in the Pizza City parking lot.
The W-30 package added cold air induction to the three Rochester carbs and a hotter cam, but the power ratings remained the same. The battery was moved to the trunk to make room for the extensive Outside Air Induction system made up of a dual-snorkel air cleaner connected to scoops in the front bumper with four-inch diameter hoses.
According to Hemmings, just 54 W-30 optioned cars were built in 1966, all with Muncie four-speeds.

In 1967 the three-speed Turbo 400 became available and the W-30 got it’s signature red inner front fenders which would continue through 1971. 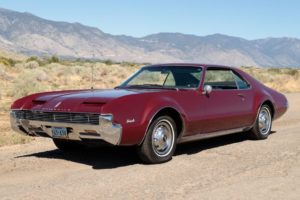 If the 1965 Buick Riviera isn’t GM’s best-looking two-door hardtop of all time, a close second is the 1966 Oldsmobile Toronado.
The Toronado marked GM’s first attempt at a front-wheel-drive muscle car. Inspired by the front-wheel-drive coffin nose Cords of the 1930s, the Toronado used chain drive to get power to its front tires. And there was a lot of power.
Under the hood was a 425-cubic-inch Super Rocket V-8 connected to a special version of the Turbo 400 transmission which placed the tailshaft next to the torque converter and connected it to the Hy-Vo chain drive. The engine was Oldsmobile’s most powerful at the time with 385 hp and 475 lb-ft of torque.
These cars are capable of very long front-drive burnouts.

In the late 1960s all GM divisions building muscle cars—Chevy, Buick, Oldsmobile, and Pontiac—were restricted to a 400-cubic-inch limit in mid-size or smaller cars.
To get around this corporate mandate, Oldsmobile partnered with George Hurst, the man behind Hurst shifters. He wanted to put his name on cars and Oldsmobile wanted more cubes in its 442 model.
A deal was struck and Oldsmobile shipped 515 ‘442s’ without badging and as many 455-cubic-inch engines to Hurst for “conversion”. Demmer Engineering in Lansing, Michigan was hired to transplant the motors, but it was a ruse to satiate GM’s executives.
The 455-cubic-inch engines, which were rated 390 hp and 500 lb-ft of torque, were actually installed at GM’s assembly line, where the cars were also painted Peruvian Silver, a color taken from the Toronado. The cars were shipped to Demmer, where they received black stripes and a black decklid. Hurst/Olds badges were installed along with a Hurst Shifter for the Turbo 400 automatic. Ram Air, with scoops under the front bumper, was standard. 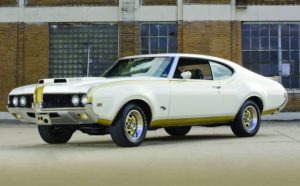 The meeting at Oldsmobile probably went something like this. “We did it and we didn’t get caught. Let’s do it again. Thank you for coming.”
In 1969 Oldsmobile and Hurst went back to the same playbook, only this time they built 914 of their special 455-powered muscle cars, and they were able to dress it up the way George Hurst originally wanted to the year before.
For 1969, the cars got the white and gold color scheme that would become iconic, as well as two massive functional hood scoops and a large rear spoiler. The Ram Air fed 455 was now rated 380 hp but kept its 500 lb-ft of torque at 3200 rpm.

As before the engines were installed at the factory and there were no four-speeds. 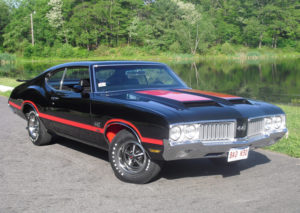 In 1970, GM’s silly cubic inch rule was lifted and every Oldsmobile 442 was 455-powered. The engine, which kept with its 10.5:1 compression ratio, was rated 365 hp and 500 lb-ft of torque at 3600 rpm and it could be backed by the Turbo 400 automatic or a Muncie four-speed manual.
Buyers could also choose a coupe or convertible with the W-30 package, which added forced air induction with a new scooped hood and engine modifications, although the horsepower rating went up to just 370 hp, ‘wink wink’.

Another cool new item was the optional W-27 aluminum differential which was 22 pounds lighter than the cast-iron unit.

Let a TKX conversion package give you overdrive for your classic

A little Info on the Sunbeam Tiger
February 24, 2022
Part 5 of 5-part Series/ MDL modified TKX in to a ’67 Chevelle
February 18, 2022
Go to Top
We are currently working with a new telephone system. Thank you for your patience!
+