Return of the Cobra 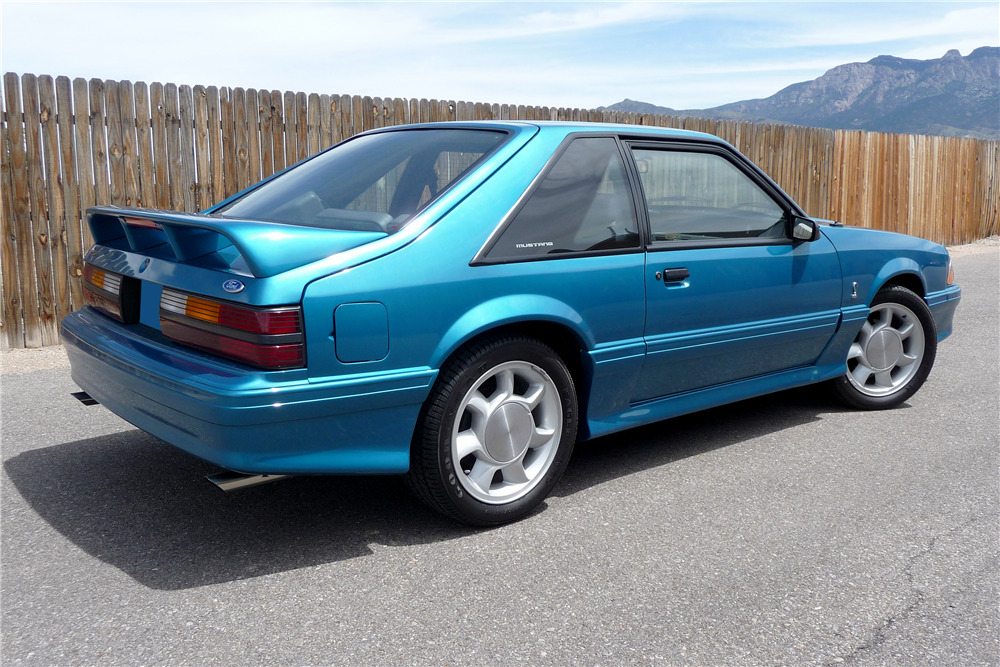 In 1993  this new offering was launched during the 1992 Chicago Auto Show. It was the premier vehicle of Ford’s newly established SVT division, designed to showcase SVT’s four hallmarks of performance, substance, exclusivity, and value.
The exterior of the 1993 SVT Cobra was similar to that year’s GT model with differences explained below. 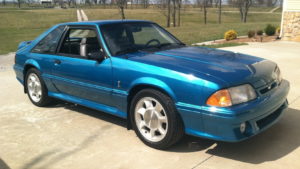 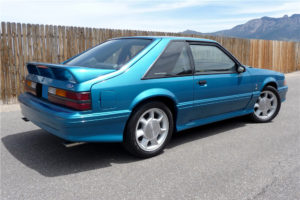 With the increased engine output of the new Mustang SVT Cobra, the Borg-Warner World Class T-5 transmission needed an internal upgrade, which allowed it to yield a higher torque capacity compared to the standard World Class T-5. This upgrade consisted of custom gearing 1–3 (which were reduced by 10% and hardened), 4th/5th (just hardened) gear was the same as standard T-5s found in the LX/GTs. The holding capacity of the Cobra’s clutch was increased by way of a higher clamping force pressure plate using the same 10-inch diameter as the GT/LX. 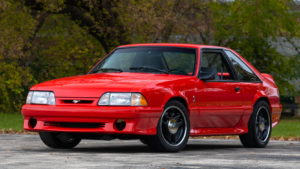 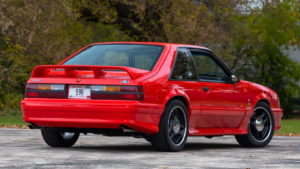 The 1993 Cobra R was the first of three Cobra R models produced, and it was an extremely exclusive vehicle. As the “R” designation in its name stood for “Race”, the car did not have a radio, speakers, wiring and antenna, air conditioner, foglights, sound deadener, rear seat, rear safety belts, rear carpeting, and roll-up cargo cover, among other items.
The car had power steering, but no other “power options”. For example, it has roll-up windows, manual door locks, and manual-adjustable mirrors. Also, manually-adjustable Opal Gray cloth bucket seats from the Mustang LX were lighter than the GT/Cobra sport seats, and a piece of thin gray carpeting secured by Velcro covered the bare hatch and rear seat area. The deletion of all this equipment shed some 450 pounds, but it was somewhat offset by the necessary addition of heavy-duty hardware to enable the car to handle the rigors of competition.

To stiffen the chassis, a strut tower brace was installed to tie the cowl together, and a pair of V-braces (used on all 1983–1993 Mustang convertibles) attached in an X-pattern tied the subframes together. The Cobra R featured Eibach springs that were a bit too stiff for the street, but perfect on a racetrack.
The Cobra R also benefitted from the adjustable Koni shocks and struts, helping to cement the car’s reputation as a serious driving machine.

The car also featured 13-inch Kelsey-Hayes vented rotors in front and 10.5-inch vented rotors in the back. According to Neil W. Ressler, the executive director of vehicle engineering for Ford Motor Company at the time and one of the founding fathers of SVT, the 1993 Cobra R’s brakes “were the most expensive brakes ever fitted to a [production] Mustang. I bought the brakes for the R model out of my engineering budget. I wanted big brakes, and we didn’t have them.
The program couldn’t afford it. Unbeknownst to the higher-ups at Ford, I spent like $2,100 per car to buy those big brakes. But the last thing I wanted was a fast car that didn’t stop. We ended up putting good brakes on all those [Cobra R] vehicles.”

The same 5.0L V8 from the street-spec Cobra was used in the race-ready Cobra R. However, the radiator was unique to the Cobra R, and a purge tank was installed for improved cooling. A power steering cooler (located behind the left foglight bezel) and an engine oil cooler were standard.

The Cobra R wheels were actually the optional 17×8-inch five-lug wheels from the soon-to-be-released 1994 Mustang GT, but they were painted gloss black with a chrome lug cover. The standard tires were Goodyear Gatorbacks. To give the car better front-end geometry, lower control arms from the 1994 Mustang were fitted.

Contrary to SVT’s stated wishes, many of these Cobra R models were purchased by private collectors and never actually driven, but several competed successfully in the International Motor Sports Association (IMSA) Firestone Grand Sport Series and Sports Car Club of America (SCCA) World Challenge Class B Series.
Of the three Cobra R models produced, the 1993 model had the benefit of being the lightest and the smallest.

A total of 107 Cobra R models were produced, and all were painted in Vibrant Red Clearcoat. According to Ford’s announcement on April 7, 1993, the Cobra R was produced to take the Fox-bodied Mustang out in grand style, a “best of the last” model.
According to SVT, each one could go 0-60 mph in 5.7 seconds and do a top speed of 140 mph.