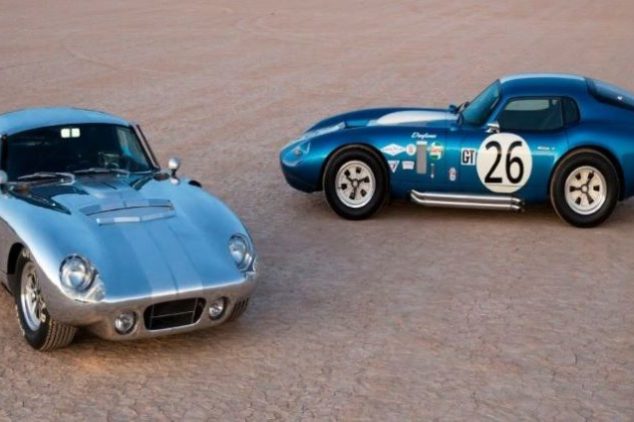 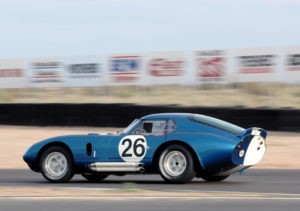 (also referred to as the Shelby Daytona Cobra Coupe)
It is related to the Shelby Cobra roadster, loosely based on its chassis and drive-train developed and built as an advanced evolution.
It was engineered and purpose-built for auto racing, specifically to take on Ferrari and its 250 GTO in the GT class.

The original project had six Shelby Daytona Coupes built for racing purposes between 1964 and 1965, as Carroll Shelby was reassigned to the Ford GT40 project to compete at the 24 Hours of Le Mans, again to beat Ferrari in the highest level prototype class.
The Shelby Daytona, allowed Shelby to become the first American auto-builder to win a title on the international scene in the FIA International Championship for GT Manufacturers in ’65.

During 1964 and 1965, Ford entered their six Shelby Daytona Coupes in numerous races through the British Alan Mann Racing Ford factory team, as well as a temporarily selling or leasing to other racing teams such as “Tri-Colore” of France and Scuderia Filipinetti of Switzerland.

The Challenge of Ferrari & the Mulsanne Straight 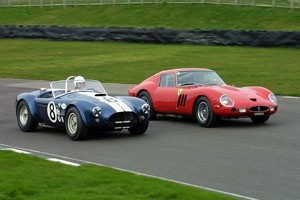 Carroll Shelby, after winning Le Mans in 1959, wanted to return to Europe to beat Enzo Ferrari at Le Mans with a car of his own design.
Having developed the AC Cobra/Shelby Cobra into a successful GT race car, he realized that the weakness of the open-cockpit sports cars at Le Mans was the aerodynamic drag which limited top speed on the 3.7 miles (6.0 km) the Famed long Mulsanne Straight to around 157 miles per hour (253 km/h), nearly 30 miles per hour (48 km/h) less than the Ferrari 250 GTO.
The GTO could hold speeds of circa 186 miles per hour (299 km/h).
Given the length of this straight, this speed differential represented a loss of over 10 seconds per lap which could negate any power and acceleration advantage that the Cobra had in the slower sections.

Shelby asked employee Pete Brock to design the Daytona’s aerodynamic bodywork and Bob Negstad to design the car’s suspension. Negstad also designed the chassis and suspension for the GT40 and the CSX 3000 series Shelby Cobra, often referred to as the “coil-Spring Cobra” chassis.

After sketching the proposed design on the floor of the Shelby America workshop, starting with the roadster chassis crashed at the 1963 Le Mans race, Brock removed the bodywork and placed a seat and steering wheel in alignment with where he felt that they should be. He then placed driver Ken Miles in the car and using scrap wood and gaffer tape, designed the windscreen – the first component to be manufactured for the car. He then interspaced wooden formers and using these as a guide, hand-made the aluminum bodywork for chassis #CSX2287 around them.

Shelby conferred with an aerodynamics consultant from Convair who said that the design needed to be extended on the tail by at least 3 feet (0.91 m), but Brock stood by his design. Miles took the car to the Riverside Raceway, and on the 1 mile (1.6 km) main straight, took the car on his first five laps to 186 miles per hour (299 km/h), admittedly after it had been found to have “almost flown, lightening the steering a great deal” at speeds above 160 miles per hour (260 km/h).
It took another 30 days of development before Miles signed off the car, clocked at that point capable of speeds over 190 miles per hour (310 km/h). CSX2287 was transported to Daytona Speedway for its debut race in the February 16, 1964, Daytona Continental 2000 km. Driver Dave MacDonald earned the pole position with a time of 2:08.200 and an average speed of 106.464 MPH. 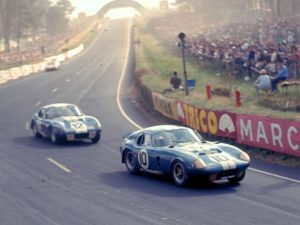 Some info on chassis numbers

The first Shelby Daytona Coupe was built at the Shelby American race shop in Venice, California. The remaining five were built at Carrozzeria Gransport (Italian for “Grand Sport Coachbuilders”) in Modena, Italy.

In July 2015 Shelby American announced that they would produce a limited run of 50 continuation Daytona’s to honor the 50th anniversary of the Daytona’s win in the International Championship for GT Manufacturers. Some of the 50 are to be aluminum-bodied, while others will have cheaper fiberglass bodies.

In 2004 Ford and Shelby created a sports coupe dubbed the Ford Shelby GR-1, with a sleek body and the new V10 powering the new Shelby Cobra. Carroll Shelby has explained that he does not want it to be called a Cobra, but it does bear resemblance to the Daytona.