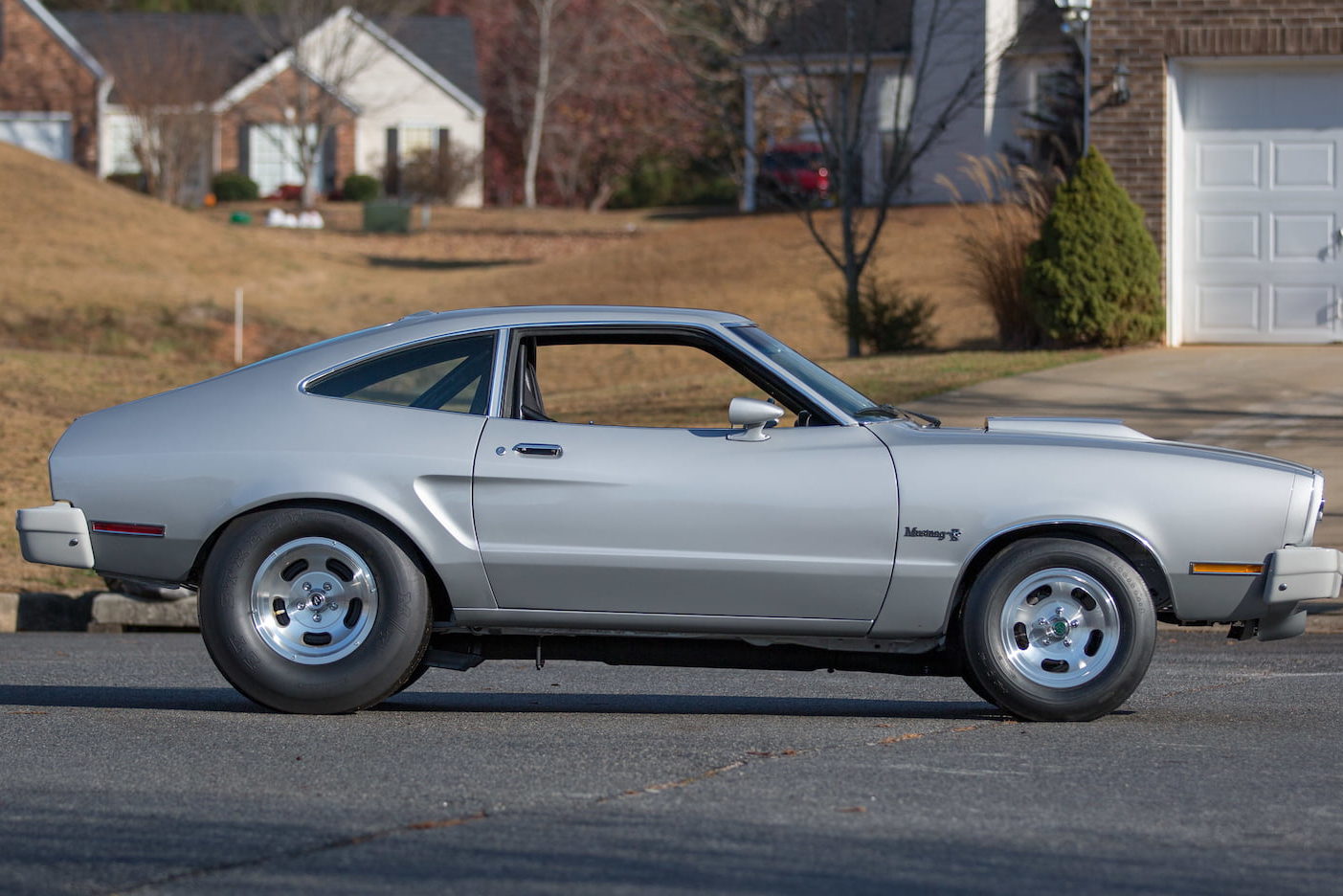 Sudden Death:
The Ruggirello-Roush Mustang II, Sudden Death, is probably the most famous Mustang II of all time 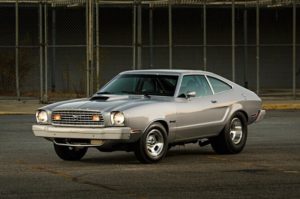 Mustang fans are well aware of Jack Roush.
Today he’s best known for his partnership in the Roush Fenway NASCAR team, but Cactus Jack has been a hardcore Ford racer for his entire career, first gaining fame in the early NHRA Pro Stock ranks with his partner Wayne Gapp.
The two campaigned a bunch of Gapp & Roush (G&R) Pro Stockers back in the day, including a four-door Maverick (the Tijuana Taxi) to take advantage of the rulebook. However, Roush had his hands in all kinds of stuff through the years, including building privateer race and street cars. One of those cars was a wicked street racer for Detroit-area Joe Ruggirello, a then-new Mustang II with a huge (for the day) 505ci big-block shoehorned under the hood and into the firewall.

Hot Rod magazine’s Gray Baskerville visited Roush’s shop often to see what was up, photographing the Ruggirello-Roush Mustang II as it came to life and finally running the feature in the April 1977 issue of the magazine, naming the car Sudden Death because that’s the impact it had on any car that faced off against it.
The car quickly became the most famous Mustang II of the day and has remained that way ever since, including being named in 2009 to Hot Rod’s list of Top 100 Hot Rods That Changed the World. It had also been featured multiple times in Super Stock & Drag Illustrated and Car & Driver magazines, adding to its fame. 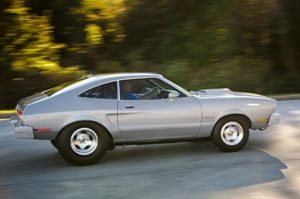 Ruggirello was reported to have spent $12,000 to have G&R build the car—huge money in 1975—and true to the build he street-raced it around Detroit before sending the car back to G&R a year later for more power and reduced weight.
In 1980 or 1981, he sent it back again for the installation of twin turbochargers, again making it a rare bird for the time. Then the car kind of fell off the radar and out of sight, though it remained solidly in the minds of many hot rodders around the world, including the author.

One of those who remembered the car and Baskerville’s article fondly was Tom Tate, who first saw Sudden Death in person in 1995 during a Fun Ford Weekend show at Gainesville Raceway.
It was then white with blue stripes and had the twin turbos on the big-block, looking nothing like the 1977 version of Sudden Death, but Tate realized that it was the same car.

He says, “The thing that gave it away was the notched cowl. Gapp & Roush moved the engine back 10 inches and built an entire new firewall and torque boxes.”

He left to see the rest of the show and by the time he came back the car was gone, prompting a 15-year online search to find out who owned it.

Tate says, “After almost 15 years, in January 2010 I found a couple of guys talking on a Ford forum about having seen it on eBay for sale. The auction listing had already closed with the reserve not having been met, but eBay had not yet closed the listing, so I was able to contact the owner to see if the car was still for sale. The car had been sitting in a storage lot in New Jersey for almost 10 years. Turns out it was still for sale, with a couple of others also trying to buy it. We reached an agreement on a sale and he delivered the car to me the following week.”

The rear slicks were originally Firestone Drag 500s in 29.5×15 size. They haven’t been made for years, so the car now wears Mickey Thompson ET streets in a similar size. The wheels also had to be restored and were expertly brought back to their original machined finish. The front wheels were originally 13×6 ET slots with Goodyear D70-13 Polyglas tires. The tires are not reproduced, so Tate made the decision to install five-lug rotors and source a pair of 14×6 ET slots that would allow use of D70-14 Polyglas tires for the same look.

After sitting outside in Jersey for a decade, the car was in pretty bad shape when Tate got it. It sort of ran, but not well, and needed a lot of work. Tate says, “I spent the first six months doing research, doing work needed to get the car safe to drive, and thinking about how to go about the restoration. Even though the turbo work was done by Roush, I made the decision to remove them to take the car back to its original configuration in that April 1977 issue of Hot Rod. This is how everyone remembers the car, so that was the goal for the restoration.”

He removed the turbos, had new headers built, and fixed some other small things to make the car drivable again, and then began to work on the wiring and researching the details, including the rear suspension. Originally, Roush had tubbed the car to fit fat tires and moved the leaf springs inboard for room, but somewhere along the line, the car got ladder bars and coil overs.
Photos dug out of the Hot Rod/TEN archives and a few conversations with Wayne Gapp (through his son Jeff Gapp) helped Tate take the rear suspension back to 1977 specs. 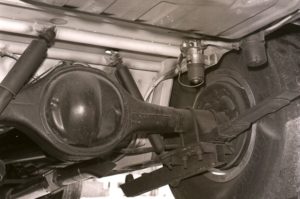 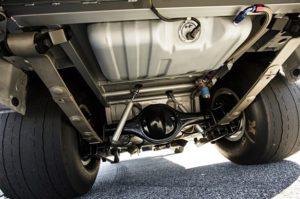 These photos from the TEN archives really helped Tate restore the rear suspension to its original condition.
He contacted Eaton spring, and they had a set of leaf springs made up of the original Ford drawings.
Meanwhile, Tate kept studying the photos and made up his own drawings for the traction bar mods, support plates, and rear offset shackles and commenced fabricating those pieces.
Removing the coil-over parts was tough, as all the brackets had to be removed completely from the frame and rear axle housing. Once all that was removed, the original G&R suspension was put back in place to match the original setup exactly, down to the 1970s-era Lakewood traction bars modified exactly as the originals were. He also rebuilt the rear-end with all new bearings and a new Detroit Locker (originally had a Traction-Lok that was in bad shape), and he reused the original nodular case, 4.30 gearset, and Strange 31-spline axles.

All exterior grillwork, bezels, marker lights, door handles, emblems, and more are NOS parts—the original pieces were in poor condition after years of exposure.
The window moldings were restored and re-anodized by Extreme Metal Works and kept original to the car.
All the glass is original except the windshield—it had already been replaced early on with a 1978-dated glass, which was separating, so Tate had a Carlite Ford piece installed to replace it. 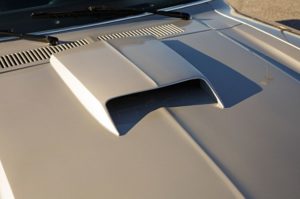 The original hood had been modified so Tate found a stock hood from another 1975 and modified it to match the photos he dug up.
The scoop is a 1969-1970 Mach 1 piece, cut down to fit the scale of the hood.

The body required quite a bit of work, especially the cowl, quarter-panels, and engine compartment. Tate says, “The cowl had been cut to clear a large air bonnet for the turbos. I sourced another cowl section that provided repair pieces for the damaged area. Portions of the inner aprons had been cut away for turbo downpipes and exhaust manifolds, so all of that had to be fabricated and repaired. The rear floor area had been hammered in to clear the ladder bars until the metal ripped open, so I sourced a rear floor section that provided repair pieces for those areas.”

The rear hatch was rusty and needed to be replaced, but Tate transferred the original glass to the new part. He also had a lot of work to do on the opened-up wheel wells. Once the body was all done, he sprayed it the original 1975 Mustang silver, and the repaired G&R fiberglass bumpers were painted in a gray closely simulating the original gel-coat finish when originally installed. 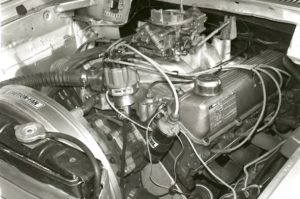 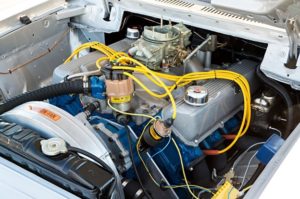 Then and now: Originally the engine was a 0.030-over 460 with 429SCJ heads that was most likely blown up street racing. When it went back to G&R for the turbos, they added an offset-ground crank that provided a 4.15-inch stroke with Carillo rods. The new engine retains these exact same parts. The headers were originally fabricated by JR headers but were obviously changed when Roush put the turbos on, so Tom Tate had them reproduced by Dan Neumann Race Cars (Ocala, Florida) and ceramic-coated in a larger tube size (1 7/8-inch primaries originally, 2 1/8-inch now), with JR header mufflers. Cubic inches are again 505. It has not been dyno-tested. 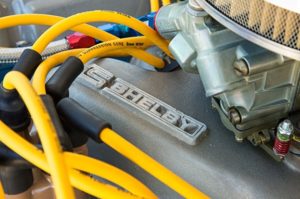 The original Shelby dual-plane intake is still in use, with a Holley 850 double pumper carb that Tate had Pro Systems modify to flow 930 cfm.
The distributor is an ACCEL BEI with an old-school (naturally) tach drive.

The engine retains the flavor of 1977 and some of the original parts but has been updated to more modern internals in some cases. Tate installed a more modern Comp Cams solid roller cam and had Powered by Ford in Orlando, Florida, port the Blue Thunder heads—otherwise, it is the same as it was in 1977. “I think Joe, Wayne, and Jack would approve!” says Tate.

He goes on to say, “The more I got into this car the more I realized what was done in the original build. Just the engine installation, chassis setback, firewall fabrication, new trans tunnel, the back halving of the chassis . . . Lots of work in 1975 for a street car!

Tate is the fifth owner of the car since it was first built. He has a copy of the original Ford Motor Credit title in Joe Ruggirello’s Mother’s name (Josephine Ruggirello, just as Baskerville’s “Sudden Death” article stated), and the other owners were Russell Hobson, William Thayer, Peter Magner, and then Tate. But even though he says the car has been the toughest restoration he has done to date, with all the studying, research, digging, and labor Tate doesn’t feel like he owns Sudden Death. He says, “I’m happy to be its caretaker until the next owner is found.” 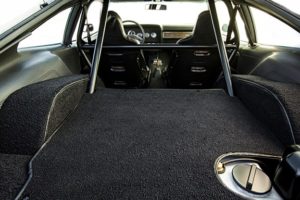 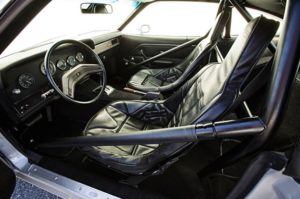 The interior is completely original, other than carpet and headliner. The seat covers and Don Hardy Race Cars seats were G&R race pieces from their old Pro Stock cars. One of the original seats was shattered, so Tate had fiberglass support “cups” fabricated off the one good seat to support the bottoms and a metal plate on top of the broken seat formed the repair. He then injected marine expanding foam to provide internal support. Tate reports that the seat is now “solid as a rock.” 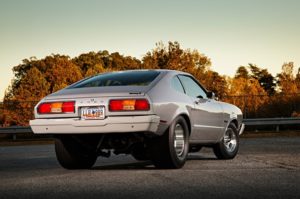 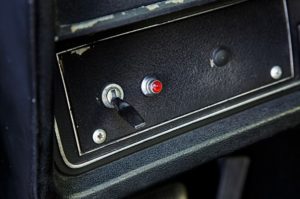 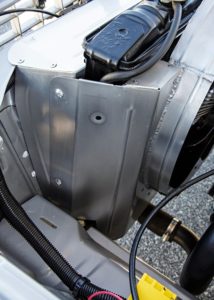 The radiator is a 1965 Ford Galaxie piece with side mounts modified to fit and an aluminum fan shroud, custom fabricated by G&R. 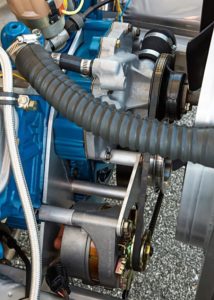 The pulley/spacer system had been modified and cobbled together over the years.
Tate researched the photos and duplicated the original setup exactly, which was made harder with the motor plate, and after much study he also found and installed the correct fan/clutch assembly as was used originally. 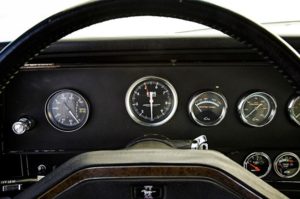 The gauge panel was custom fabricated by G&R and, it appears, was installed when the turbos were done.
The steering wheel still shows some cigar burns from Joe Ruggirello.