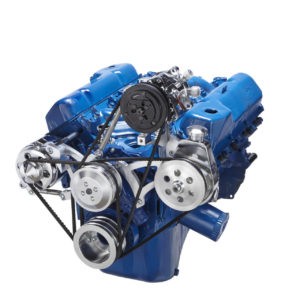 By 1970 the 390 V8 FE engine was becoming outdated. With pending emission requirements, a more modern replacement was needed.
Although the big-block 385 family was used to replace the larger displacement 428 V8 FE engine, this engine family had nothing comparable in size to the 390 V8.

For the 1971 model year, Ford introduced the 400 V8 engine as a replacement for the 390 V8. Ford billed the 400 as the 351C’s big brother. It was designed to provide brisk acceleration in medium to heavyweight vehicles in an engine package that was smaller and lighter than the FE V8 Engines and the 385 Series Ford V8’s.

The 400 featured larger 3.00-inch main bearing journals, the same size as those used in the 351 Windsor, but rod journals were the same size as the 351C.
The cylinder heads for the 400 were the same as those used on the 351C-2V, having the open combustion chamber with smaller 2V sized ports and valves.
* All 400s were low-performance engines that ran on regular fuel and all used a 2-barrel carburetor, a cast-iron intake manifold, and small port 2V cylinder heads.

The 400 was designed as high torque, low RPM engine that was a smaller, more efficient, and lighter alternative for the big Ford 385 engines, the 429 and 460, for use in Ford’s medium and large size cars. Weighing just 80% of a similar big-block, it was originally available in Ford’s Custom, Galaxie, and LTD lines, and in Mercury Monterey, Marquis, and Brougham for the 1971 model year.
For 1972, it was also available in the Ford Torino, Mercury Montego, and its variations through 1979.
By the late 1970s, it was also available in the Ford Thunderbird Ford F-series pickup trucks, the Lincoln Continental, and Mark V.

Unlike the 351C, almost all 400 blocks used the large bellhousing bolt pattern used by the 385 family big-block and were typically equipped with the higher torque-capacity C6 transmission.
There were a small number of 400 block castings produced in 1973 with dual bellhousing patterns. It had the large bellhousing and the small bellhousing bolt pattern used by the Windsor V8 family and the 351C, though it was not necessarily drilled for both. These blocks have been dubbed the “400 FMX” by enthusiasts, though were never officially referenced as such by Ford.
Most 400’s also had a unique engine mount bolt pattern but these 400 FMX blocks had provisions for both 351C-style and 400/351M engine mounts.

For 1972, the compression was reduced through the use of dished pistons. The compression was reduced again for 1973 and a new timing set retarded the camshaft timing 6° to aid with reducing emissions.
Changes to the cylinder heads for 1975 to add the ‘Thermactor’ emission system caused the exhaust port to be more restrictive than the earlier 1971-74 heads.
The 400 was re-tuned by Ford in 1975 to use unleaded gasoline with the addition of catalytic converters to the exhaust system.

The development of the 400 V8 led to a significant design flaw that remained with the engine throughout its production life.
With a longer stroke, the compression ratio became excessively high with the 351-2V heads and flat top pistons. Ford engineers reduced the compression ratio by using a piston with a compression height that was too short and this led to an excessive deck clearance of 0.067″ … compared to a 351-2V at 0.035”.

In 1971, this method of reducing compression was enough due to the higher-octane leaded fuels.  –  However, once lower octane unleaded fuels became used the excessive deck clearance lead to problems with detonation.

For 1975, Ford dealt with this problem by decreasing the compression ratio further with a larger 15cc piston dish and reducing ignition timing.
However, the 400 V8 obtained a reputation for being prone to detonation. Although Ford did not make a piston to correct this, T Meyer Inc worked with Keith Black pistons to make a 400 piston that increases the compression ratio and gives the piston a “zero deck” deck clearance.

When the 351 Cleveland was discontinued after the 1974 model year, Ford needed another engine in that size range, since the production of the 351 Windsor was not sufficient.
Ford took the 400 engine’s tall-deck block and de-stroked it with a shorter 3.5 in (89 mm) stroke crankshaft to produce a 351 cubic inch (5.8 L) engine.
This crankshaft was not the same as a 351C, in that it used the larger 3.0 in (76 mm) main bearing journals of the 400 V8.

To compensate for the shorter stroke the pistons for the 351M have a taller compression height so that it could use the same connecting rods as the 400. The result of the 351M using the longer 400 connecting rod was a higher connecting rod-to-stroke ratio of 1.88:1 than the 351C and 400’s of 1.65:1.
Other than pistons and crankshaft the 351M shared all of its major components with the 400, and it also used the large 385 Series style bellhousing.
The 351M was only ever equipped with a 2-barrel carburetor and open chamber small port 2V cylinder heads.

351M production began for the 1975 model year and blocks were cast in the Michigan Casting Center or the Cleveland Foundry.
The 351M was the last pushrod V8 block designed by Ford until the introduction of the 7.3-liter “Godzilla” engine for the Super Duty trucks in the model year 2020.

There exists debate as to what Ford meant by the “M” designation of the 351M.
Some claim the “M” stands for “Modified” – being modified from a 400-V8 with a shortened stroke – though others claim that the “M” refers to the Michigan Casting Center, where the 351M began production.
Some say that the “M” designation has no official meaning and that it was just Ford’s way of distinguishing the 351M from the 351C and 351W.

Likewise, Ford’s use of the 400 blocks in the creation of the 351M engine has resulted in the 400 mistakenly being referred to as the “400M” or “400 Modified.” This is despite the 400 has been the design basis from which the “modified” 351M was derived and it was in production several years before Ford used the “M” designation.
Further confusion arises from Ford printing “351M/400” on the emission stickers for the engine.

Ford’s official name for the 400 V8 contains no additional designations – the proper nomenclature is simply “400.”