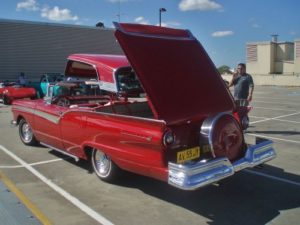 The Skyliner had a complex mechanism that folded the front of the roof and retracted it under the rear decklid.
It had three roof drive motors driving four lift jacks, four door-lock motors, ten solenoids, four locking mechanisms for the roof, and a total of 610 ft (185.9 m) of wiring.
The large top took up vast amounts of trunk space, limiting the car’s sales.
Production totalled 20,766 units in 1957, declining to 14,713 in 1958 and to 12,915 in 1959.
An electric clock was standard.
Fuel consumption was around 14 mpg overall.
The fuel tank was placed under the rear seat, which inadvertently added safety in rear collisions.

What’s the Difference Between the Ford 351 Windsor, Cleveland and Modified Engines?
July 24, 2020