A Short Article About Fitting Application

The contemporary racer/builder can reach for an almost limitless selection of AN fitting variations to accommodate any plumbing situation, and with a fair amount of color and coating choices.
Some companies even offer a complete line of raw fittings allowing the user to anodize them to a custom color theme.
However, in seven decades of development one problem remains the bane of this ubiquitous system: With just a slight amount of over-torque, they leak.
Not only that, but the solution (additional torque) worsens the problem thus creating a condition known as, too tight… still leaks.
Every time fitting is removed and reinstalled the potential for a leak is created.

Of course, this is nothing new and is almost an accepted and endearing (to some) attribute of the system.
For others, the quest for a good seal and a dry engine bay can be all-consuming.

When recently visiting a highly organized and well-funded Top Fuel team known for their fanatic dedication to the task at hand.
To obtain an effective seal in their AN system, they are in the practice of lapping in the 37-degree sealing surface using a valve grinding compound followed by a thorough cleaning and a careful assembly.  The professional who practices such extreme care is to be admired, but there must be a better way to mitigate the dreaded galling that so often spoils an otherwise excellent fluid system.

A technical treatise on the subject of galling isn’t necessary for our purposes but the American Society for Testing and Materials (ASTM) has formed and established a common definition for the phenomenon:  “Galling is a form of surface damage arising between sliding solids, distinguished by microscopic, usually localized, roughening and creation of protrusions, (i.e. lumps), above the original surface.”

Personally, I like to think of it as a byproduct of good intentions.  I once tore the bottom bung out of a dry sump tank in a futile effort to stop a leak.
All it got me was a short weekend and a problem with the Environmental Protection Agency. 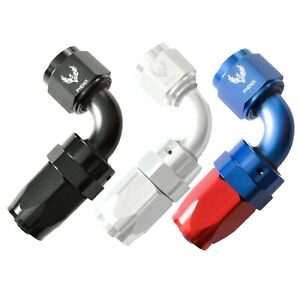 an American performance fitting manufacture based in Eagle, Idaho, has taken a fresh look at an old problem. In the spring of 2012, they introduced a new line of adapter fittings called TEFLOK®.
The idea was simple: backbore an ordinary AN spec fitting along the conical center of the 37-degree sealing surface and install a robust PTFE seal.
This seal, which protrudes slightly above the surface not only features effective sealing properties but exerts a compression back pressure on the hose end threads.
This pressure helps prevent fittings from inadvertently backing off. In addition, the seal is replaceable thereby extending the service life of the adapter.
Over-torquing an ordinary adapter leads to ruin but with TEFLOK® you get a second chance.

It is important to note that this idea was attempted back in the 1940s not long after AN fitting went into general use. At the time the best available material was rubber, which simply did not pose the same properties as Polytetrafluoroethylene (PTFE).  PTFE has certain pliability that resists galling and fills in microscopic gaps that produce “weeping” and outright leaks.
In addition, the material has a steadfast resistance to breakdown even against the most exotic fuel concoctions.

On average, TEFLOK® fittings cost less than a dollar more than traditional adapter fittings, depending on the dash size required. But with replaceable seals offering extended service life the premium represents cheap insurance against a pesky leak or a tech inspector with an attitude.

HOW TO: Information about Oil & Manual Transmission Maintenance
January 14, 2021

Speedometer Gear Calculation
September 18, 2020
Go to Top
We are currently working with a new telephone system. Thank you for your patience!
+