You are here:
Featured Products 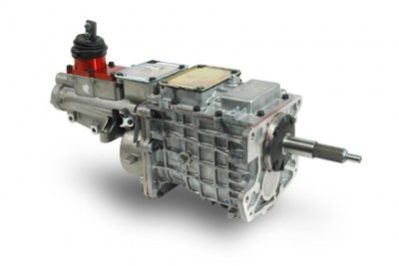 TREMEC offers several different models of five speed transmissions**, and introduced a new lineup in 2004.  Here is a bit of the history of the TKO line.

The manual transmission line of Borg Warner is now owned (since 1998) by Transmission Technologies Corporation (TTC), however, the design remains unchanged between the two transmission lines. Borg Warner transmissions, for the most part, use a single rail gear selector and carbon fiber lined steel synchro rings, where the TREMEC transmissions have a single rail that selects and moves three shift rods internally. These three rods have spring loaded detents that make the transmission feel notchy during shifting. Instead of carbon lined steel synchro rings, the TREMEC TKO line is built with solid bronze synchros with no linings. It is for these reasons that the TREMEC TKO does not like to shift well above ~6,000rpms unless modified.  Carbon fiber rings are now available as well as several other modifications to improve shifting and durability.  Contact us for details.

How was this transmission improved?  The 83mm center distance was maintained, and upgraded the counter shaft from a 3 piece to a one piece design.  All the gears and shafts were upgraded to a higher alloy steel, while the aluminum shift forks were replaced with steel forgings and completely redesigned.

The shifter has been upgraded to performance status with a unique adjustable biasing system to tune to your exact preference.  Eight different shift locations means the shifter will likely fit in your stock console.

The TKO-500/600 features dual speedometer pick-ups, with both mechanical and electronic speed pickups.

All cast iron shift forks for improved durability reducing failures with non-adjustable positive shift stops so it can not be over-shifted.

GM TKO-500 has a 3.27 first gear with a .68od. Torque rating 500ft/lbs. Standard shift location is the rear “vintage Camaro” shift point but can be changed to several other shift locations. Main case bolt pattern is a “Muncie” 4 speed pattern. Call for details.

See our TKO FAQ’s for more answers about the TKO series 5-speed transmissions.

TREMEC TKO transmissions can be shifted from three different locations. Front, Mid, and Rear. From the factory they are configured as a rear shift. To change the location, a mid or front shift kit (front shifter is obsolete) are install and the rear shifter location is capped off with a provided plate.

TREMEC TKO transmissions are a great replacement for Ford toploader four speeds or GM Muncie fours as they have been configured to bolt up to the stock bellhousings.  Keep in mind that TREMEC TKO’s are larger and taller then their 4 speed counter parts.  We offer TREMECTKO’s with a shortened input shaft that will bolt right in or if you only need the input shaft and bearing retainer give us a call. The only parts needed to convert from a three or four speed is a cross member, shift lever, shift ball, and shorter speedometer cable. The drive shaft length is not affected for the Ford conversion as the transmissions are the same length. The slip yoke may have to be changed to match the output shaft.

The Ford 3550 is a step up from a T-5z with 3.27 first gear and a .68od.  Torque rate increased to 375ft/lbs.  The input shaft has the same 10 spline input shaft as that of a 93 and earlier T-5.  The TKO main case bolt pattern is different than the T-5 so a TKO bellhousing is needed when switching out a T-5.  The output shaft is a standard Ford 28 spline that has been used since the C4 automatic and toploader 4 speed days.  Since the TKO’s have the same bolt main case pattern as the early 3 or 4 speeds, it can be bolted directly to the 3 or 4 speed bellhousing when the input shaft is shortened to match.  We offer both the shortened input shaft and bearing retainer as well as ready to install new shortened input TKO’s.  Call us for details and/or check our product catalog on-line.

The GM 3550 is designed to provide a five speed replacement to the Muncie four speed transmission.  The input shaft and main case are ready to bolt to a four speed bellhousing.  Input shaft is a 26 spline with a GM pilot. Output shaft remains a 28 spline so the slip yoke will have to be changed.

The Ford TKO transmission has the same layout and gear ratio as the 3550 but with stronger 26 spline input shaft and 31 spline output shaft and stronger 3rd gear. It is torque rated to 450ft/lbs.

The GM TKO is designed to be a replacement five speed transmission.  However this time the output shaft is a 31 spline with the stronger 3rd gear.

The TKO-II is the same as the TKO but is equipped with a .83 overdrive instead of a .63 overdrive.  Again great for road racing or off roading. Torque rating increase to 475ft/lbs but has been known to handle much more.

All four models have the same overall dimensions. The 3550-II and TKO-II are best suited for road racing where the .83 overdrive comes in handy on the long straight-a-ways.

**Note: The T5 is also manufactured by TREMEC but is treated separate from the 3550/TKO transmissions.