How To Swap C4 Automatic for a Manual Transmission – Inline Update 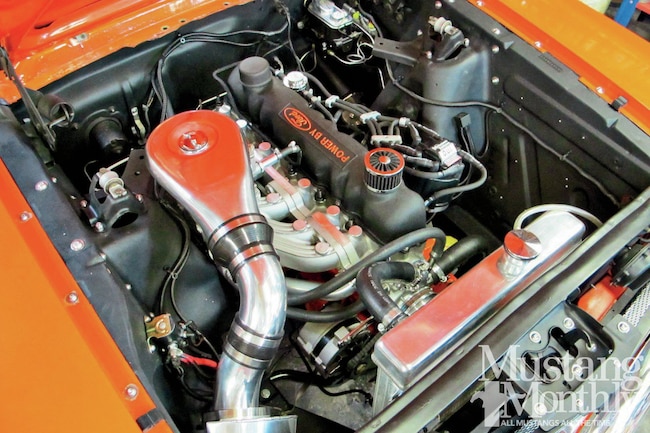 For those just tuning in, we looked over the shoulder as Brian Stilwell and his father-in-law Ricky Snelgrove hopped up the 200ci inline-six in Brian’s ’65 Mustang hardtop for our October 2013 issue. Brian’s update featured a bunch of Classic Inlines hardware, including their aluminum head and intake combo, a new cam with full roller rockers, and more. When the dust settled and the dyno came to a stop, Brian’s Mustang saw an improvement of 45 horsepower and 50 lb-ft of torque.

The net gains were nice, but Brian knew there was more power to be made with his combination by comparing it to similar builds on the forum at www.fordsix.com. His low compression ratio was certainly not helping the cause and his choice of a small two-barrel for our original dyno testing was another concern. Finally, the completely stock C4 automatic was certainly sapping some of the fun out of the new combo and Brain really wanted an overdrive transmission to make the car more functional, as he plans to drive it to work.

Ditching the C4 for a five-speed manual was on Brian’s to-do list from day one, but we asked him to hold off on the conversion so we could get real apples-to-apples numbers on the engine upgrades. While Brian has future plans to degree the camshaft and upgrade to a 600-cfm four-barrel carburetor, the T-5 swap was his next priority since he had already purchased/accumulated the majority of the parts for the swap. Starting with a used T-5 transmission he procured locally, Brian added installation hardware, clutch components, shifter, and more from the folks at Modern Driveline. A quick trip to the local driveshaft shop saw to the bit of shortening the stock driveshaft required, and during a weekend on jack stands, Brian and his father-in-law tackled the swap without much issue.

With the T-5 swap completed, we invited Brian to come by the Mustang Monthly tech center once again so that we could strap down the ’65 to our Dynojet chassis dyno to discover the net improvement in horsepower and torque. Brian reports the car is much more fun to drive, no longer bogs coming out of the hole, and it even idles better. Check out the photo captions for a quick look at his T-5 conversion and then see the dyno chart for the hard numbers.

We’re certain this isn’t the last time Brian’s hardtop will be on our dyno, as we’re certainly intrigued by what de-greeing the cam and dropping a bigger carb onto the inline-six will do for his numbers. Stay tuned. 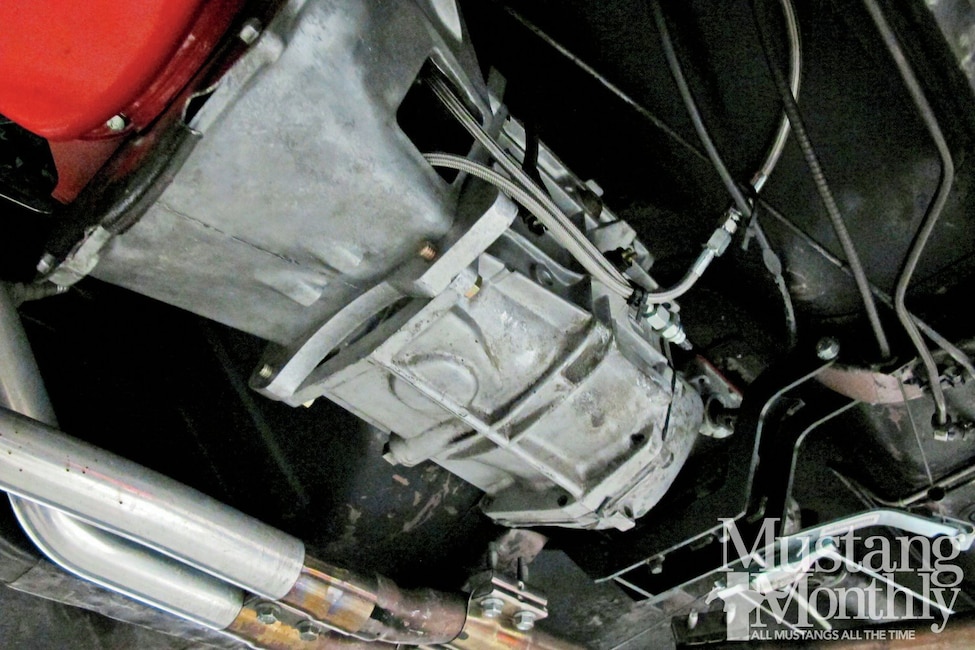 1 The heart of Brian’s swap was this lightly used T-5 five-speed manual from a four-cylinder Fox Mustang. Brian coupled the trans with a bell-housing adapter plate, T-5 cross-member, and a modified driveshaft. Note the hydraulic clutch line too. 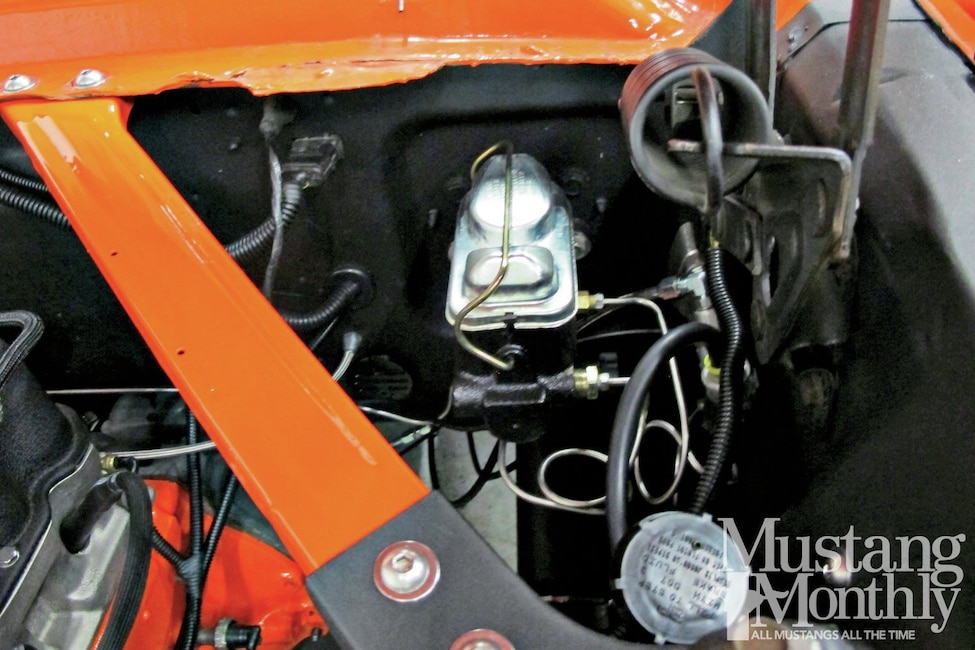 2 Tucked away in the corner of the engine bay is the Modern Driveline hydraulic clutch master cylinder and fluid reservoir. The installation required a couple of fabricated master cylinder brake lines, but otherwise Brian says the kit was a bolt in and works great. 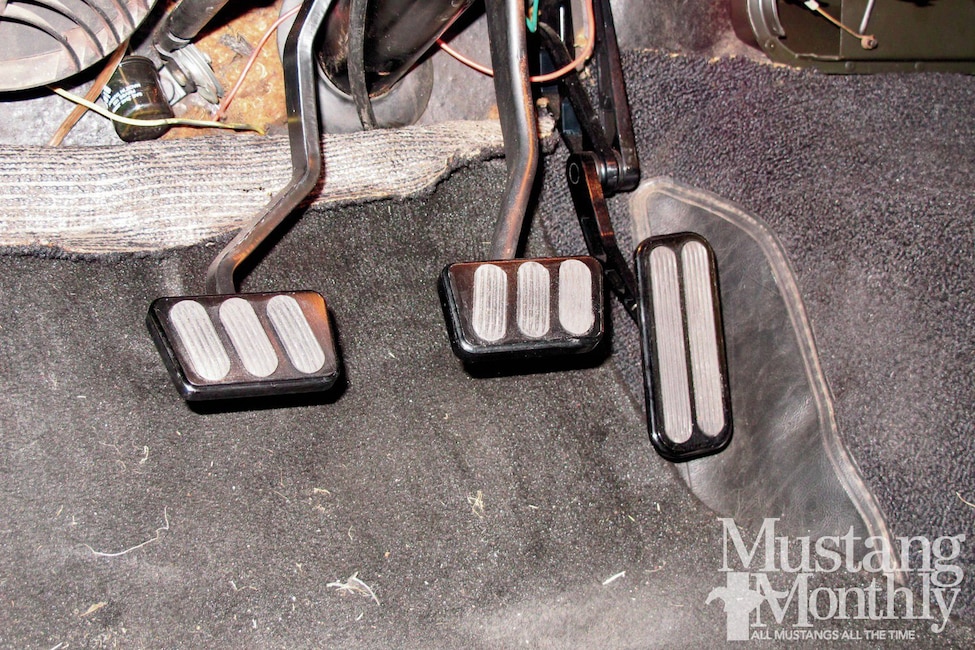 3 Surprisingly, Brian’s Mustang was originally a manual trans car, but the clutch pedal was long gone. Brian refitted a new clutch pedal from Modern Driveline and connected it to their hydraulics.
Lokar Performance clutch and brake pedal pads in black tie in with the Lokar cable throttle pedal installed during the inline-six upgrades. 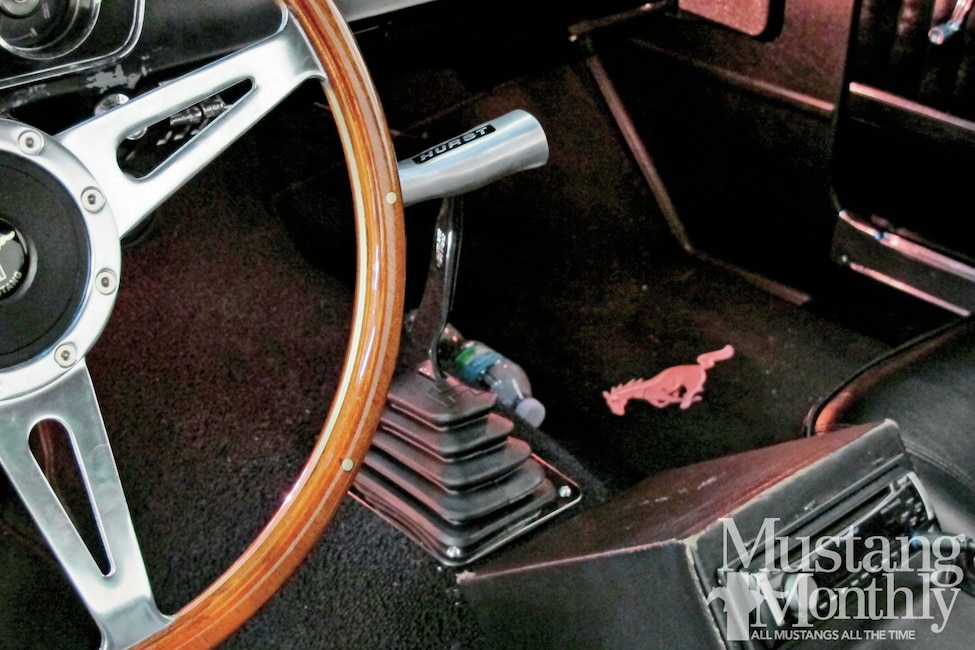 4 The T-5 is shifted via a Hurst shifter with a Hurst flat chrome stick and retro-look T-handle to keep a vintage vibe to the interior. 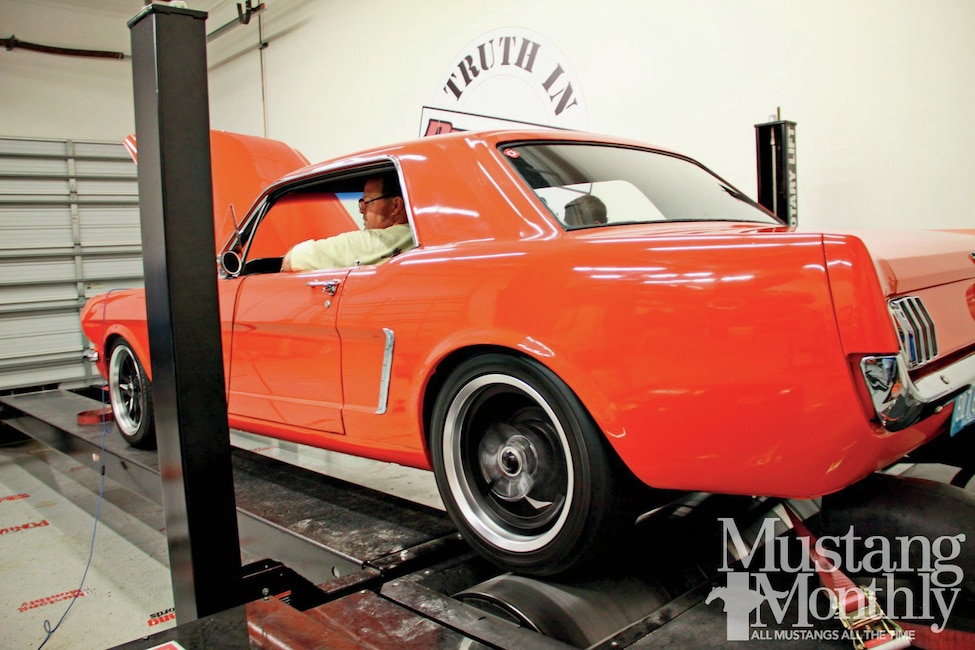