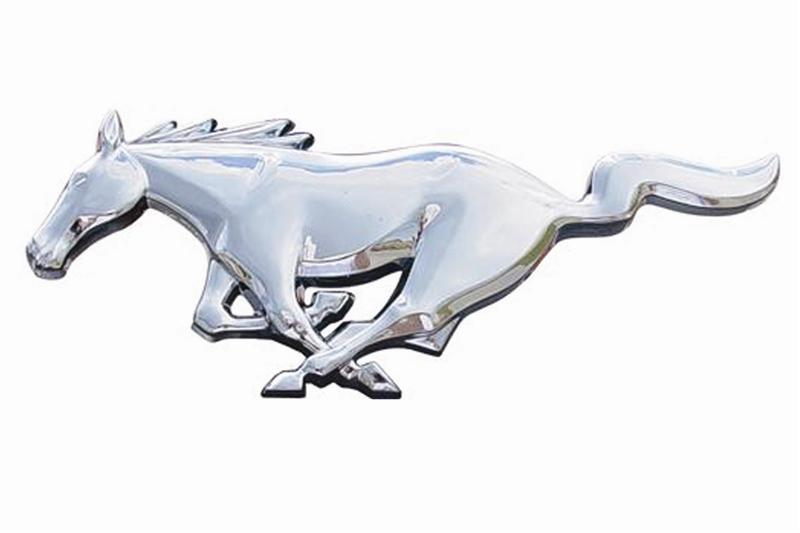 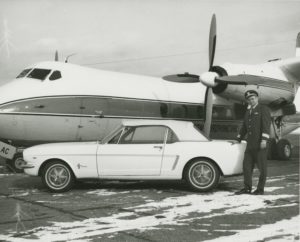 ALL ABOUT THE FIRST MUSTANG

Every great story has a memorable beginning, and the genesis of the Ford Mustang is no exception.

One of the most popular and longest-running automobiles in the United States, the Mustang has been a global phenomenon since it rolled off the assembly line for the first time in the spring of 1964. Since its inception, the Ford pony car has undergone six generational shifts and a host of redesigns along the way, while remaining a fixture in the muscle car community around the world.

Through all of the political shifts and societal changes over the past five-decades-plus, the Mustang has been there every step of the way, without taking a single year off. From the 14-year Fox Body run that touched three different decades, to the SN95 era, to the Fifth and Sixth Generations that helped the pony car continue its excellence into the New Millennium, the Ford Mustang has stood the test of time and maintained its identity throughout the ever-evolving automotive landscape.

The Ford Mustang has over 50 model years, but due to the timing of its maiden model year, the first batch of pony cars that were produced between April-July 1964 would later become known as 1964.5 Mustangs. The era of the first Mustang lasted just four months and change, but the brief run represented an important stretch in the Ford Motor Company’s history and would lay the foundation for all of the many achievements in the future.

Long before everyone’s favorite muscle car became the performance driving and pop culture icon that it is, the Ford Mustang was just an idea in the brilliant mind of Ford executive Lee Iacocca.

After the infamous Ford Edsel bombed, Iacocca and a dedicated team of engineers set out to create an all-new project that would help the automotive giant keep pace with its rivals in the competitive industry. Learning from the company’s previous mistakes, it was Iacocca’s vision to create a “small car” that would weigh no more than 2,500 pounds (1,100 kg) and would measure no more than 180 inches (4,572 mm) in length.

In addition to the very specific size provisions, Iacocca envisioned that the first Mustang would have four bucket seats and a floor-mounted shifter, along with a number of both power and luxury options. In Iacocca’s world, the original Ford Mustang would be marketed towards women, but the pony car would also be a vehicle that men would enjoy.

The long-time Ford executive set forth lofty goals for his pet project in that it would be both stylish and affordable while appealing to a wide demographic and checking numerous boxes for the average American consumer. In short, Iacocca believed that the Ford Mustang had limitless potential and it would not only lift the company out of a tough period but would blaze the trail for future success.

“ONE OF THE PROUDEST MOMENTS OF OUR LIVES”

After 18 months of intense preparation and development, the first Mustang ever made was finally ready to be introduced to the world. Unlike most vehicle debuts that take place quietly in Detroit showrooms, Iacocca and the team at Ford had other plans for the first Mustang.

In order to gain as much media exposure as possible, Iacocca, Henry Ford II, and the rest of the team unveiled a prototype of the 1964 1/2 Mustang at the World’s Fair in Flushing Meadows New York. 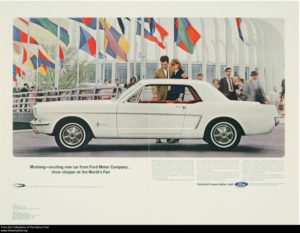 Billed by Iacocca as “one of the proudest moments of our lives” and “one of the most important occasions in Ford Division History” in a press conference several days before the fair opened to the public, Iacocca introduced the pony car to a large crowd of onlookers as well as a sizable media contingent on April 17, 1964.

There was a buzz within the Ford pavilion and throughout the entire World’s Fair as the masses came in droves to catch a glimpse at the first Mustangs to ever roll off the production line. Those that wished to purchase a 1964.5 Mustang could decide between a coupe and a convertible model.

Speaking of choices, Ford fans had several different engine options for their Mustangs, including a 170 CID/ 2.8L 105hp-producing straight-six, as well as a trio of V8 motors. Towards the end of the 1964 1/2 Mustang production period, performance driving enthusiasts could purchase a dominant 289 CID / 4.7L engine that could put down an impressive 271 horsepower. Additionally, buyers had a choice between three and four-speed automatic and manual transmissions.

Regardless of what was under the hood, all 1964.5 Ford Mustangs shared a number of exterior characteristics, including a lengthened hood, chrome wrap-around bumpers, a chrome grille, and of course, the presence of the now-iconic running horse logo. The distinct body, along with wall-to-wall carpeting and a sporty steering wheel on the inside, helped set the 1964 1/2 Mustang apart from its competitors, and it did not take long for the world to take notice.

THE METEORIC RISE OF THE FIRST MUSTANG

Even before the first Ford Mustang could be physically seen by the public, Iacocca and his team were hard at work promoting the pony car.

On April 16, 1964, the night before the World’s Fair extravaganza, the Ford Motor Company blasted the airwaves with simultaneous commercials airing across ABC, CBS, and NBC at the lucrative 9:30 p.m. Eastern time slot. Ever the dynamic speaker, at the time of the unveiling in New York, Iacocca further built hype for the first Mustang ever made by touting the pony car’s presence in showrooms across the country and around the world.

As Iacocca predicted, auto enthusiasts from all walks of life stormed dealerships in the hours that followed the pony car’s debut on all three major networks. With people determined to be the first ones to own the latest and greatest vehicle, Ford proudly announced that it had unloaded over 22,000 Mustangs the very first day.

Available at an affordable price of $2,368, Ford sold over 100,000 units in the brief 1964.5 model year, outshooting the company’s goal by roughly 20,000. The momentum carried over into the fall months and into the year 1965. By the pony car’s first anniversary in April 1965, the Ford Motor Company had sold over 418,000 Mustangs, and had clearly taken the automotive industry by storm.

Beginning on August 1, 1964, Ford had fully transitioned into the 1965 model year, but the entertainment business would help keep the 1964 1/2 Mustang at the forefront of everyone’s minds. Contrary to popular belief, the Ford Mustang did not make its cinematic debut in the classic James Bond film Goldfinger.

On September 9, 1964, Nicole Cruchot cruised around in a Poppy Red 1964.5 Mustang convertible in the French comedy Le Gendarme de Saint-Tropez. Known to American audiences as The Troops of St. Tropez, Cruchot’s character, Geneviève Grad, holds the distinct honor of being the first person to drive a Ford Mustang on the silver screen.

A mere two weeks after Cruchot’s adventure on the coast of France, the1964 1/2 would dazzle moviegoers once again in Goldfinger. Flashy cars have been a staple of the James Bond movie franchise, and in one of its most popular films, Tilly Masterson, played by Tania Mallet, led Agent 007 on an exhilarating chase through the Furka Pass in the Swiss mountains inside her 1964.5 Mustang convertible.

The Ford Mustang made an appearance in the ensuing Bond movie, Thunderball, the following year, and the pony car continues to be a Hollywood mainstay in the present day. Though more famous ones have come and gone over the past 56 years, it was early the acclaim and notoriety of the 1964 1/2 Mustang that helped set the tone for many more movie and television appearances in the future. 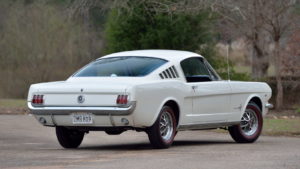 Obviously, with such little lag time between the pony car’s debut and the beginning of its first full model year, the Ford Motor Company was not interested in reinventing the wheel for 1965. In fact, because the body styles are nearly identical, it can be extremely difficult to find many differences between 1964.5 and 1965 Mustangs on the surface, particularly if you only have a few seconds to examine them.

Most of the attributes that set the half and full model years apart reside inside the cabin or under the hood, but there are a few cosmetic discrepancies that can help you out. One of the most notable differences between 1964 1/2 and 1965 Mustangs is that the Fastback did not become available until the 1965 model year officially began. If you are staring at a Mustang Fastback, you can say with 100% confidence that you are not looking at a 1964.5 pony car.

Similarly, Mustangs that were produced between April 17-July 31, 1964 do not feature hood moldings that are commonly found on the 1965 and 1966 units. Some of the earlier ’65 models did not contain “Ford” hood moldings either, but its absence does not necessarily mean that you are looking at a 1964.5 ‘Stang. However, if the front of the vehicle does feature a hood molding, you know for sure that the vehicle in question was produced in the 1965 model year.

A few other key tells are:

Look under the hood for:

Check the trunk for: 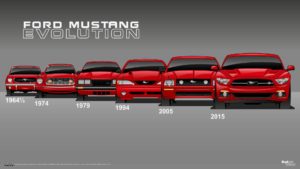 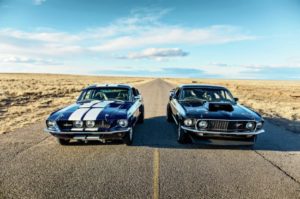 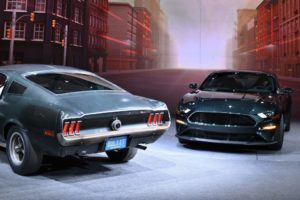 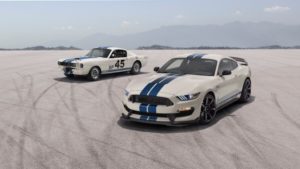 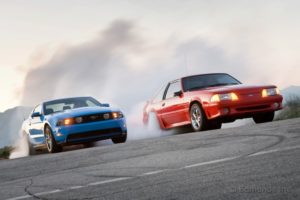 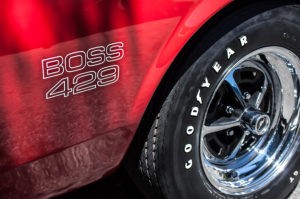 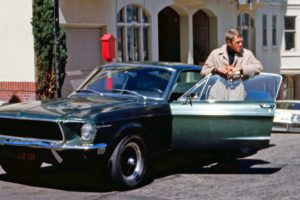